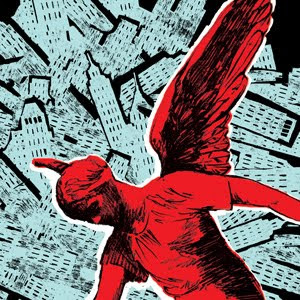 Tony Kushner's "Angels in America," a two-part "gay fantasia on national themes" is one of those theatrical pieces I always look out for. Like "Follies," which I have written about frequently, or Tom Stoppard's "Arcadia," "Angels in America" flips my switches. I have seen excellent productions of both "Millennium Approaches" and "Perestroika," including the Broadway original, the first Chicago production, which I believe was considered a touring production, and one in Champaign-Urbana at the Station Theatre. The HBO movie version, starring luminaries like Meryl Streep, Emma Thompson and Al Pacino, was also lovely and lyrical. And a recent off-Broadway revival at the Signature Theatre starring the second Mr. Spock, Zachary Quinto, received a lot of critical acclaim, as well.

When done right, "Angels in America" is, as one of my friends said when we first saw Part One, a transcendent theatrical experience. I don't say "transcendent" lightly, either. This is a fantastic show, with achingly real characters who swirl through each other's lives, intersecting, rearranging, connecting, coming to some conclusions but not all good ones, growing but not completely maturing, and maybe learning to love or to be honest at least a little. The vivid, unforgettable characters in "Angels in America" -- slimy Roy Cohn, Ethel Rosenberg, a blunt Mormon mother, her son who is married and a conservative lawyer working for Roy Cohn even though he is gay and unhappy, his even more unhappy wife, a nurse who used to be a drag queen, a beautiful man who has AIDS, his lover who can't handle illness and hates himself for it, an Eskimo, a mysterious travel agent, a battle-ready Angel, and even the world's oldest living Bolshevik -- are what makes it sing. 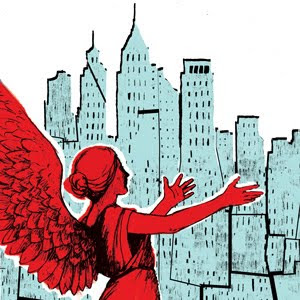 And now Chris Jones at the Chicago Tribune is reporting that Court Theatre and director Charles Newell have announced the cast for their upcoming "marquee production" of this amazing play, scheduled for March 30 to June 3, 2012. Everyone in the cast is from Chicago -- no imports here -- including Eddie Bennett as Louis Ironson and Rob Lindley as Prior Walter, the couple split apart by illness; Geoff Packard as Joe Pitt and Heidi Kettering (fresh off "Wicked" in Chicago) as his wife, Harper; Hollis Resnik as Hannah, Joe's mother; Michael Pogue as Belize; Mary Beth Fisher as the Angel, and Larry Yando (well-known as Scrooge in the Goodman Theatre's perennial "A Christmas Carol") in the role of Roy Cohn.

For more information, click here or here. Tickets will go on sale December 1 for individual orders, although groups may order now by calling 773-834-3243.

Transcendent theatrical experiences don't come along every day.
Posted by JulieK at 4:32 PM