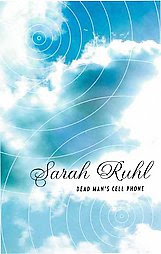 Sarah Ruhl, who writes theatrical, poetic, quicksilver plays about issues both big and small, seems like the perfect recipient of a MacArthur "Genius" Grant. To write the plays she writes, you might imagine that her mind would look as crowded, surreal and beautiful as the elevator full of rain that travels to the underworld in "Eurydice" or the apples that fall off one woman's balcony into another's living room miles away in "The Clean House." Her plays are full of words and visual images, both poetic and strange. And somehow moving, too. So, you know, genius.

When asked by the LA Times to describe why she wrote "Dead Man's Cell Phone," Ruhl talked about lies and fabrications, privacy, technology, a cab driver (or possibly an "eminent theatrical scholar" and expert on the use of ladders backstage) named Jacques Joli-Coeur, and the "joys of multiplicity." So... Okay. I don't really understand that. As it concerns "Dead Man's Cell Phone," I would say it is a play about curiosity and connection, about mortality and the mundane, about one woman trying to figure out who someone was and who loved him, just because he died but his cell phone kept ringing, and she wanted to know what that meant.

As you would expect, this is not really a linear play in terms of plot. When Jean, a woman who works at a Holocaust museum, goes looking for the whys and wherefores in the life of the man who died, she finds his widow, his mother, his brother and his "Other Woman," and she finds herself in both the Afterlife and the Black Market. There is irony, humor and sympathy there, underneath the dizzying display of verbiage.

It's a curious, mysterious play, and one that needs to be seen to be figured out. And it may have the best hook of any play in a long time. Dead man. Cell phone keeps ringing. Who can resist? 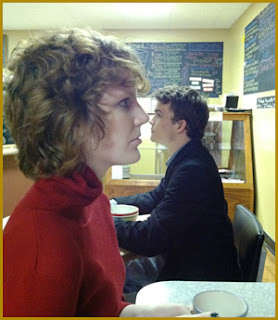 Erin Cochran (L) and Tim Jenkins (R) in Eureka
College's production of "Dead Man's Cell Phone"
Eureka College tackles "Dead Man's Cell Phone" and all its quirky joys next week, opening November 15th at Pritchard Theatre. The play is directed by Bloomington actor and playwright Rhys Lovell, guest director for Eureka, and stars Erin Cochran as Jean, the one who takes the journey into the heart of the dead man and his cell phone. In support, Tim Jenkins plays the titular dead man, Alyssa Martin has the role of his widow, Kate West appears as his mother, Louis Servant plays his brother, and Alyssa Davis takes on the role of the Other Woman.