You Can Sing "Tonight" Tomorrow Night 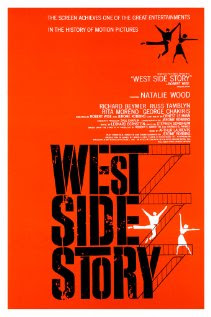 Yes, that's right. "Tonight" tomorrow. By "Tonight," I mean the classic song from "West Side Story," whose film version celebrates its 50th anniversary this year. And by "tomorrow," I mean that "West Side Story" will be back on the big screen on Wednesday, November 9, at 7 pm at the Starplex Normal 14 Stadium.

Although the movie was a big hit, it's always seemed strange that Natalie Wood was cast as Maria and Richard Beymer was cast as Tony, since neither can sing. They were dubbed by Jimmy Bryant and Marni Nixon for the big songs. Still, the acting is good, and the three dance roles -- Biff, Bernardo and Anita -- are done very well. As Bernardo and Anita, George Chakiris and Rita Moreno both won Academy Awards. Russ Tamblyn, who played Biff, wasn't nominated for anything, but I still love him in that role. Robert Wise and Jerome Robbins, who shared directing honors, also took home an Oscar.

Although people make fun of teen gang members singing and dancing, it really, really works for me in "West Side Story." The stage version, where Sondheim's lyrics are partially translated into Spanish to give it verisimilitude, has been touring around, giving lots of people a chance to see it live and in person. But I saw it first at the movies. As much as I love live theater, I still think that all the flashy dancing, stirring music and deathless passion seem that much more real on the big screen when it comes to "West Side Story."

Yes, this movie is still "Cool." Oh, and Office Krupke? Krup you!

For details on the Bloomington-Normal screening, click here.
Posted by JulieK at 10:20 AM