Cast Set for J.B. at ISU Next February

Auditions are done, and all the actors have been cast for Illinois State University's winter/spring season. If you're looking forward to the next batch of ISU shows and you're wondering who will be playing whom, you can start with the Oklahoma! cast here. That rip-roarin' musical begins February 22, 2013, at the Center for the Performing Arts. But the night before Oklahoma! takes its first bow, you can start the season with Archibald MacLeish's J.B. on February 21. Here's the low-down on the cast for that one. 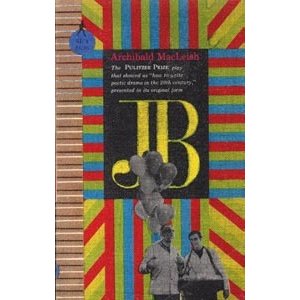 J.B. is a verse play, written in 1958, taking up the Biblical story of Job set under the big top of a traveling circus, as a balloon vendor and a popcorn seller tell the tale of a wealthy banker who loses everything but his faith in God. The original Broadway production starred Raymond Massey and Christopher Plummer as Zuss and Nickles, the two vendors, and Pat Hingle as J.B. Basil Rathbone -- Sherlock Holmes himself -- came in as a Mr. Zuss replacement in that production. The show played for 364 performances and won the 1959 Pulitzer Prize for Drama as well as Tony Awards for Best Play and for director Elia Kazan.

For Illinois State University, Matthew Scott Campbell will direct, with a cast that includes Andrew Rogalny, Jr., as Mr. Zuss and Matt Hallahan as Nickles. Rogalny recently appeared as the hypocrite of a Chaplain in Mother Courage and Her Children, while Hallahan was sweet, dopey Freddy the nose-bleeder in Noises Off. Tommy Malouf, who played Eilif, Mother Courage's bloodthirsty son, will play J.B., the banker whose faith is so severely tested by God. That is quite a departure!

Performances of J.B. are scheduled for Westhoff Theatre from February 21 to March 2, 2013.
Posted by JulieK at 6:27 PM