Casting News: Michelle Stine Heads Up TALES OF THE LOST FORMICANS at ISU 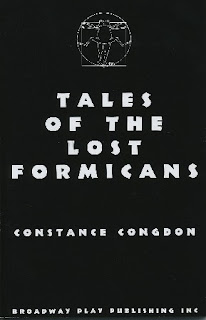 Tony Kushner called Constance Congdon's Tales of the Lost Formicans a look at the "postmodern, collective nervous breakdown American society has been having." I suppose that's as good a description as any.

In Congdon's play, we begin with alien anthropologists studying Earth in the 20th Century as they try to piece together who these "Lost Formicans" were based on the detritus they left behind. That includes kitchen tables and chairs and "numerous wheeled sarcaphogae used to carry spirits to the next world." Or, you know, cars.

Within the alien framing device, Congdon gives us Cathy, mother to a 15-year-old, coming home to live with her parents after a messy divorce. But home isn't exactly a walk in the park. Her dad has Alzheimer's, Mom isn't coping well, son Eric is unhappy beyond belief to be transported to this weird world, and there's a conspiracy nut named Jerry who keeps popping up. Cathy's childhood friend Judy is still in the neighborhood, but she's full of stories about suicide and dead dogs.

It's to Congdon's credit that this portrait of America in the late 80s, seen from an alien point of view, is funny, surreal, incredibly irreverent and sad, all at the same time. The story isn't linear. It isn't rooted in reality. Its characters are crazy. But they sure feel real when it comes right down to it.

ISU Associate Professor Deb Alley will direct the production scheduled to play in the intimate space at Centennial West 207 from March 28 to April 6, 2013. Her cast has also been announced, with Michelle Stine, last seen in an exquisite performance as mute daughter Kattrin in Mother Courage, in the role of Cathy, Jacki Dellamano (The Marriage of Bette and Boo) and Joseph Faifer (Noises Off) as her parents, Carlos Kmet as her son Eric, and Hannaniah Wiggins as Jerry, the sweet conspiracy theorist next door.

That adds up a great cast and a great director working on a great script. All kinds of possibilities for alien anthropologists!
Posted by JulieK at 1:15 PM