Start the Countdown! MAD MEN Is Back in 25 Days!

AMC's Mad Men is coming back, baby! They're scheduled for a two-hour season premiere, as you can see from the banner above, and they've released new artwork to tease the new season. The illustrations were done by a British artist named Brian Sanders, who just happened to have done that kind of work back in the period Mad Men is set in, giving it an Ad World of the late 60s verisimilitude. 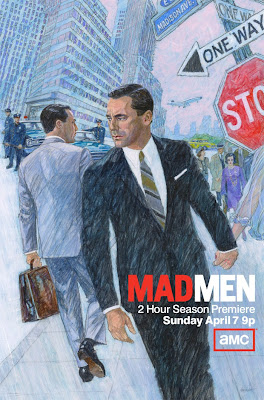 Here's a different version of that poster art, with a better look at Jon Hamm's two Don Drapers (one the gray-flanneled-suit ad exec with briefcase and the other hanging onto the hang of a woman wearing a filmy dress. I'm not sure what that's meant to connote, except maybe that Don Draper and his new wife, Megan, are turning away from the gray-flannel world he used to inhabit, even as there are still two sides to Don Draper. Whatever the message in the poster, Don is echoing Cary Grant in North by Northwest, especially the scenes at the United Nations, when it seemed New York was looming ominously over our hero.

From other pictures floating out there, we know that Megan is back and looking even more 60s-ish with frosted lipstick and high hair, that ex-wife Betty and her husband Henry are still around, with all three Draper kids in tow, and Roger, Joan, Pete and even Bert Cooper are in the mix at the ad agency. It looks like everybody has gone to a fancy dress party, including Peggy, who left Sterling Cooper Draper Pryce, and junior staff, with Stan now sporting a beard and Ginsberg in a string tie.

It's tantalizing trying to figure out why we're seeing what we're seeing and how everyone has changed (or not -- Don and Joan, I'm looking at you) since last we saw them.