"Crumble" Stands Up at IWU

Sheila Callaghan's "Crumble (Lay Me Down, Justin Timberlake)" is one strange little play.

I say "little" because it only runs about 80 minutes without intermission, it moves quickly, without a lot of excess baggage, and it has a trim cast of five.

I say "strange" because... Well, for starters, because one of those five is an apartment. Yes, one of the characters is the apartment where two of the others live. It's actually an interesting conceit, especially in Callaghan's impressionistic, poetic dialogue, where said Apartment (who was a mansion at one time) can tell us about the people who previously lived in him. He's malevolent and scary at times, definitely seedy, and yet... How cool is it that the personification of an apartment is talking to us about what it feels like when somebody touches his walls?

In the Illinois Wesleyan production directed by Dani Snyder-Young, Josh Conrad plays the Apartment, and he has quite a few flourishes up his sleeves (which happen to match the wallpaper, a nifty touch from costume designer Marcia K. McDonald) and a very expressive face under his cracking makeup (another clever idea, this time from makeup designer Kristyn Kuziak). The Apartment is depressed because the current occupants, mother Clara (Kirsten Andersen) and her 11-year-old daughter Janice (Marlee Turim), are letting the place fall down around their ears.

The Apartment is not the only thing that's crumbling. We learn in bits and pieces that Clara and Janice are mourning the loss of the dad that bound them together. Clara, a chef, has reacted by hyperventilating, freaking out and creating elaborate meals that nobody eats, while Janice doesn't bathe, has no friends, holds tea parties with her dolls that involve bleach instead of tea, and asks for suspicious items like coffee filters and a cigarette lighter for Christmas.

Clara looks to her sister Barbara, a crazy cat lady played by Allison Sutton, for support, but it's really the fantasy images of Justin Timberlake and Harrison Ford, both given life by Parker Wood, that prove comforting to this family. Wood looks and moves just right in iconic Timberlake and Ford outfits, while Sarah Krainin's set design gives him the opportunity for socko entrances.

There's something going on here underneath all the pop culture references, something twisty and dark, about what it means to be isolated and bereft and how we find ways to cope. The surreal nature of Callaghan's script makes it okay that most of the actors aren't the right age, but the script also seems to rush a conclusion and wrap things up in a way that doesn't quite fit the early sturm und drang.

Still, this is a very credible effort with a tricky little play, with an especially good performance from Josh Conrad as the faded aristocrat we call The Apartment. That kind of presentational performance (where he talks directly to us) can be tough for college-age actors, but Conrad digs in with gusto. 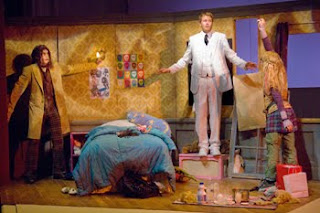 The Apartment (Josh Conrad) and Janice (Marlee Turim) react to Justin
Timberlake (Parker Wood) in "Crumble (Lay Me Down, Justin Timberlake)."
IWU students are offering a video blog of the "Crumble" experience on youtube. Visit Janice's Corner for behind-the-scenes action.