There are always a slew of new TV shows to replace all the old ones that the networks axed before we even knew they were there, so… I decided to watch a bunch of premieres so you don’t have to, and report on what’s worth watching.

Hellcats? Hell, no! I’m just going to come right out and say that this "sassy smart girl becomes a cheerleader to get a scholarship even though she hates cheerleaders" show has no redeeming features. The premise is dopey, nothing about it rings true, and especially not that the main character could ever, ever be either a law student or a cheerleader. Go get the movie Bring It On and watch it a few more times and skip this one. It’s on the CW at 8 (Central) on Wednesdays, but people, I’m telling you. Don’t go there.
I’m giving this one an F.

Terriers is definitely a keeper, sort of The Rockford Files by way of My Name Is Earl. Donal Logue plays Hank, a scruffy private investigator who doesn’t do anything on the up and up. He has an even scruffier partner (Michael Raymond-James), an ex-wife (Kimberly Quinn) he isn’t over, and a whole lot of problems paying the bills and staying on the right side of the law. It’s not exactly a unique premise, and it’s to the writers’ credit, as well as Logue’s, that the characters stay interesting and feel fresh. There’s something very human about Hank. Terriers is on FX at 9 (Central) on Wednesdays.
B+

I’m not a big fan of the spy thriller genre, even with a kick-booty female as the lead, and I don’t think I’ve ever seen any part of the movie or TV versions of La Femme Nikita. But I kind of liked the new Nikita, with the ultra-slinky, ultra-smart spy-girl now played by Maggie Q. There’s lots of dress-up as our rogue agent, who has gone on the lam after the big guys at a super-secret agency ordered a hit on her boyfriend, takes on various guises to foil her former bosses and their nefarious plots, with plenty of high kicks and chase scenes and things that go boom. I sincerely doubt I will keep up with Nikita – I just don’t get into this sort of thing – but I hope Maggie Q and Shane West, who plays her old contact at the agency, find something else to do soon, because they’re both appealing and watchable. Nikita is on the CW at 8 (Central) on Thursdays.
A for Maggie and Shayne, C for the show as a whole. 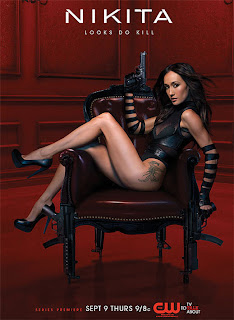 Outlaw is kind of a House for the legal world, with a snappy, smart guy who knows more than everybody else who surrounds himself with pretty, smart people to do the grunt work he doesn’t want to (and admits to one of his underlings that he only hired her because she’s beautiful, which is taken directly from House’s playbook.) Jimmy Smits stars as a free-wheeling, womanizing former Supreme Court Justice with a pile of gambling debts instead of a bad leg to bring him down. Its legal tidbits – like a Supreme Court Justice announcing a decision and his resignation from the bench during the same session – may be dicey, but it’s no worse than most of the other legal shows out there. Jimmy Smits is pretty darn charismatic, and some of the supporting players, like Carly Pope, David Ramsey and Jesse Bradford, are fun to see. I don’t know that I’m interested in more episodes, because all the clichés piling up would drive me nuts pretty quickly, but I might take a look if there’s nothing else on that floats my boat. Although the premiere episode was broadcast on a Wednesday, the show’s real timeslot appears to be Fridays at 9 (Central) on NBC.
C-

And the only other premiere I’ve found so far is Top Chef: Just Desserts, wherein people who are a heck of a lot more talented than me compete against each other in the kitchen in the realm of desserts. The first week they made cupcakes in the Quickfire round and pulled out all the stops with chocolate as the Elimination Challenge. I don’t have a handle on who’s who yet, but it’s pretty much the same as Top Chef with a sweet tooth, so if you like the original recipe version, you’ll probably like this dessert edition as well. No Tom Colicchio, though. That’s a plus for me, but your mileage may vary. Top Chef judge Gail Simmons hosts, with pastry chef Johnny Iuzzini as head judge, famed chef Hubert Keller, and Dannielle Kyrillos, editor of DailyCandy, as the judging panel. Top Chef: Just Desserts is on Wednesdays at 9 (Central) on Bravo, with plenty of repeats for people who are watching something else at that time.
B

Next up: Boardwalk Empire, a show about the collision of power-brokers, gangsters, gamblers and hard-luck dames in Atlantic City in the 1920s, starring Steve Buscemi as Nucky Thompson, a crooked politician holding sway over this empire. It starts Sunday, September 19th at 8 (Central) on HBO. The art direction alone is worth the price of admission. Visit the HBO website for tidbits on the characters and videos on how they created the amazing boardwalk set.
Posted by JulieK at 3:03 PM