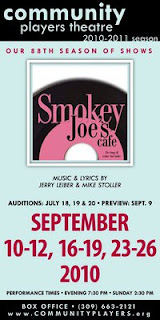 "Smokey Joe's Café," a musical revue featuring the pop and rock hits of Jerry Leiber and Mike Stoller, officially opens this Friday, September 10th, at Community Players. There's a preview scheduled for tomorrow, the 9th, if you really can't wait till Friday to get in on the action.

"Smokey Joe's" was a huge hit on Broadway, running for almost five years and over 2000 performances. It was nominated for seven Tony Awards, including Best Musical and Best Director, and the Original Broadway Cast Recording took home a Grammy for Best Musical Show Album.

It's a pure revue, without a plot, but with plenty of songs. Oh, those songs! If you haven't heard of Leiber & Stoller, they were responsible for some of the best and most famous songs of the post-World War II, pre-disco era, from "Hound Dog" to "Yakety Yak," "Stand By Me" and "Jailhouse Rock." They wrote multiple hits for Elvis, the Coasters, the Drifters, Jay and the Americans, the Shangri-Las and Peggy Lee.

Community Players Theatre is located at 201 Robinhood Lane in Bloomington (tucked behind the post office on Towanda). You can call the box office at 309-663-2121 or visit the CP website to order tickets. Tickets are $15, with special pricing for children ($6) and seniors ($11 on Thursdays, $13 Friday, Saturday and Sunday.)

One other Community Players note: They are holding auditions for their production of Hamilton Deane and John Balderston's adaptation of Bram Stoker's "Dracula" on Monday and Tuesday, September 13th and 14th, at 7 pm. They need 6 men and 2 women, ranging from age 21-65. FMI, see the Community Players website. "Dracula" runs from October 28 to November 7.
Posted by JulieK at 11:20 AM