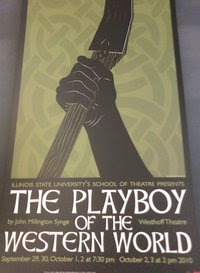 Last Sunday, before we began the panel discussion for "Woman in Mind" at Heartland Theatre, a patron and I were discussing why "Woman in Mind" is labeled a comedy when it really isn't. He told an anecdote about seeing John Millington Synge's "The Playboy of the Western World" at the Abbey Theatre in Dublin, hanging on every word, thinking it might be the saddest thing he'd ever seen. And then he saw “Playboy” again, somewhere in the US, where it was played as an uproarious comedy. Although many in the audience were rolling in the aisles, he didn't like it nearly as well.

Given that discussion, I wasn't sure what to expect from "Playboy of the Western World" on stage at ISU's Westhoff Theatre. Would they go for the human drama of a woeful Irish man taking refuge at a remote pub, offering a tale of murder and violence, and basking in the attention his story brings? Or would they fill it full of pratfalls and mugging, going for the comedy of the "playboy" who makes his tale bigger than it is, earning first rapt attention and then scorn as his lies are discovered?

The answer lies somewhere in between. Director Emily Gill keeps in some physical business and a few moments of broad physical comedy, but she also focuses on character, on who the playboy, one Christy Mahon, is inside, and how he interacts with Pegeen Mike, the feisty barmaid smitten by his "savagery and fine words." Gill has created just the right balance between comedy and drama, with a lively pace and fine acting throughout.

MFA candidates Jeb Burris and Melisa Pereyra play Christy and Pegeen with subtlety and depth, making them and their foibles sympathetic as well as entertaining. Their Irish accents are on point but not off-putting, even though I will admit Synge’s vocabulary is hard to follow at times. Burris and Pereyra play off each other well, making for a rootable couple from the first time they meet, and they carry the story quite nicely.

Supporting players Sabrina Conti, who plays the aggressive Widow Quinn, and Tony Pellegrino, a surprise visitor with a smashed-in head and more lives than Rasputin, add energy and action as well.

Steven House has designed a charming, rough-hewn pub interior which works well as a playing space, even though it seems a little too clean and tidy for this location. The set meshed well with Sandy Childers’ costume design, also done in dusty, faded shades of cream, pink and blue. Childers did a good job distressing the hems of gowns to show what they’d look like after the woman inside had trekked through wet, muddy conditions, although the costumes in general looked more upscale than I imagine these people in the middle of nowhere could afford.

Dramaturg Brett Byron provides insightful notes in the program that should prove helpful if you’re looking for information on the play’s cultural context or why it would’ve caused riots when it first opened in Dublin in 1907.

“The Playboy of the Western World” continues through Sunday, with performances at 7:30 tonight, tomorrow and Saturday, and matinees at 2 pm on Saturday and Sunday. Its three acts run 2 hours and 10 minutes, with one 15-minute intermission between Acts II and III.