Tickets went on sale last Monday for Illinois State University's fall theater and music performances. That means it's past time for you to get over to the Center for the Performing Arts (the box office is in the lobby) and pick out your seats. ISU's box office is open Monday through Friday, 11 am to 5 pm if you want to stop by in person. Or you can give them a call at 309-438-2535. Or use Ticketmaster. So many choices, so little time.

Here's a lovely picture of the Center for the Performing Arts, courtesy Pete Guither. 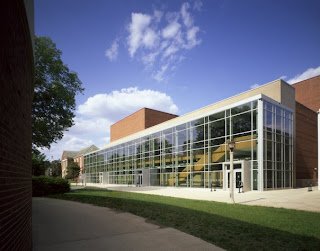 The first play on ISU's fall schedule is Irish playwright John Millington Synge's "Playboy of the Western World," directed by Emily Gill, opening September 29th. "Playboy" involves a pub in County Mayo, Ireland, and the night a young man named Christy Mahon stumbles in. Christy tells a tale of woe and violence to the people at the bar, including the barmaid, a widow and several young women, who all find him and his story quite exciting. Is Christy telling the truth? If he is, is he a criminal or a hero? And if he isn't, is he just another nobody? "Playboy of the Western World" caused riots when it opened in 1907. I don't expect riots in Bloomington-Normal, but there are only six performances and it's in Westhoff Theatre, so you are advised to get your tickets early.

Next on the schedule is "The 25th Annual Putnam County Spelling Bee," with music and lyrics by William Finn and book by Rachel Sheinkin. Cyndee Brown directs this fun, fizzy musical about six children from different backgrounds competing in a spelling bee. One of them, Logainne SchwartzandGrubenierre, bears a certain resemblance to Rachel from "Glee," and I have my suspicions that Ryan Murphy saw this “Spelling Bee” before he wrote Rachel. Along with the children, there's a crazy vice principal, a former Putnam County Spelling Bee champ who is returning to moderate this one, and a "comfort counselor" who provides hugs and juice boxes to the departing spellers. If you are very lucky, you may be chosen from the audience as a guest speller. I was. I think I went out on "lysergic acid diethylamide," so if you've got that one in the bag, you might be able to win. "Spelling Bee," which is so totally worth your while, will play in the CPA from October 7th to 16th, which includes Homecoming Weekend. Juice boxes for everyone!

Also in October, Shakespeare's "Measure for Measure" takes the stage at Westhoff, directed by Brandon Ray. "Measure for Measure" (you can call it "M4M" for short if you really want to) involves political corruption, harsh and repressive laws, sex used as a weapon and as a vice, justice, redemption and mercy. There’s a high-level official who goes undercover, a tough-guy judge who is a huge hypocrite, a lovely woman who wants to be a nun but keeps getting ensnarled by grabby men, a couple having an out-of-wedlock baby (against the law!), a sleazebag pimp, a hooker, and a need for a spare disembodied head. Sounds like an episode of “Law & Order,” doesn’t it? “M4M” runs from October 27 to 31 at Westhoff Theatre.

As counterpoint to “Measure for Measure” and its sexual game-playing, director Jon Ferreira brings “Les Liaisons Dangereuses” by Christopher Hampton to the CPA November 11-14, with two performances on the last Saturday and Sunday. “Liaisons” is a dark, seductive play, about the Marquise de Merteuil and the Vicomte de Valmont, jaded aristocrats in pre-revolutionary France who try to one-up each other by using other, more innocent people as pawns in their dangerous games. It’s about sex, power, love and the impending doom waiting just around the corner for these Aristos.

Sandra Zielinksi directs another classic, George Bernard Shaw’s “Major Barbara,” for Westhoff Theatre in December. “Major Barbara” is from the same time as “Playboy of the Western World,” and Shaw was also Irish, but the similarities pretty much end there. This one is about Barbara Undershaft, a major in the Salvation Army, who has a crisis of conscience when she finds out that substantial donations made to her cause have come from people involved with whiskey and guns. And the guns one is her own estranged father. The play raises the question of whether it’s moral to take money from dubious people if that money can be used for good. Shaw says yes. I’m not so sure. Make up your own mind at Westhoff Theatre December 8-11.

Also on the schedule are dance performances at the CPA December 9-11 and the annual Madrigal Dinners at the Alumni Center December 8-11.

Looking ahead to 2011, I can’t wait for “Merrily We Roll Along,” the backwards musical with music and lyrics by Stephen Sondheim and book by George Furth, to be directed by ISU alum Gary Griffin, who has had considerable success in New York, London and with the Chicago Shakespeare Theater. “Merrily” has fabulous music, including “Not a Day Goes By” and “Good Thing Going.” That will happen at the CPA from February 10th through the 19th, and my calendar is already marked and starred. With exclamation points.

Rahul Varma’s “Bhopal,” a look at the Bhopal Tragedy in 1984, and Shakespeare’s “Two Gentlemen of Verona,” the one about faithless men and missing jewelry, will play Westhoff Theatre in February and March, with Tom Stoppard’s “Rock 'n' Roll,” with its big themes of politics, passion, totalitarianism and, yes, rock 'n' roll, at the Center for the Performing Arts and Sam Shepard’s “The Tooth of Crime,” a creepy science fiction take on rock stars and reality shows, at Westhoff, both in April. Another dance event rounds out ISU’s 2010-11 roster, also in April at the CPA.

Tickets are available to all fall events now. Click on this link or the one that says ISU Theatre over there on the left for more information.
Posted by JulieK at 10:28 AM