"Woman in Mind" Is Almost Here! 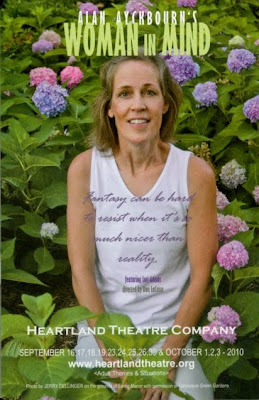 Ah, "Woman in Mind." I love British playwright Alan Ayckbourn's work in general, but I may love "Woman in Mind" most of all. It's such an intriguing, funny, scary piece of theater. It's often referred to as Ayckbourn's most personal work, since heroine Susan (the woman in "Woman in Mind") and her predicament bear a certain resemblance to Ayckbourn's mother. And the playwright has noted that audiences seem to be split on gender lines. Men, he says, think it's all quite hilarious, while women tend to find the play a bit more disturbing.

"Woman in Mind" is an unusual play, told completely in Susan's point of view. After she smacks herself in the head with a garden rake, Susan finds she now has a handsome husband, a lovely daughter and a loyal brother who are eons better than the real lout she's married to and the surly son who may've joined a cult. Fantasy can be hard to resist when it's so much nicer than reality, but... Uh oh. Now they're starting to collide!

Illinois State University professor Don LaCasse, co-founder of the Illinois Shakespeare Festival and former Director of the School of Theatre at ISU, directs "Woman in Mind" for Heartland, with Lori Adams, ISU's Head of Undergraduate Acting, tackling the role of Susan, the woman in the eye of the hurricane.

"As a director, I have always been attracted to plays that feature complex female characters," LaCasse says. "Susan in 'Woman In Mind' is very much in this tradition. We see the entire play through Susan's eyes as she never leaves the stage. She dominates the play and the role makes great emotional demands of the actor. The role requires an actress of great skill. I am most fortunate in having that actress."

He is, of course, referring to Lori Adams, who appears in the poster you see with this post. "The play has given me the opportunity to work with a wonderfully talented colleague of mine from the ISU School of Theatre," LaCasse notes. "Lori Adams, who portrays Susan, is a member of the School's acting faculty and heads the undergraduate program in acting. Joining Lori is an exceptionally talented cast of local actors, including a few ISU student actors. The opportunity to work with this talented cast on a finely crafted theatrical piece is a director's dream."

"I am drawn to the play," LaCasse says, "because it is challenging, disturbing, insightful yet funny. Ayckbourn is a master at combining the comic and the serious. In this play we have a very unhappy woman (Susan) attempting to cope with her sadness and depression by creating an imaginary family that is everything her real family is not – loving, supportive, wealthy, witty, etc. However, after a very nasty hit to the head, Susan's imaginary family takes physical form and she struggles to maintain control of this imaginary family while living in the real world. Ayckbourn manages to treat this very serious and disturbing story with great humor."

And that is what makes "Woman in Mind" so special. It's funny, it's real, it's fantasy, and it's disturbing.

"Woman in Mind" opens at Heartland Theatre on September 16th, running through October 3rd. For the complete schedule and ticket information, visit Heartland's website. There will be a special discussion after the matinee performance on September 26th, and because of my interest in Ayckbourn, I will be part of the panel, along with Laurie Bergner, a clinical psychologist who will offer insights into Susan's mental state, and Sandra Harmon, Professor Emerita of History and Women's Studies at Illinois State University, who will speak to the women's issues in the play.

To read more about the play, I highly recommend Alan Ayckbourn's website, which has a wealth of information about "Woman in Mind" as well as his other 70+ plays.
Posted by JulieK at 11:03 AM