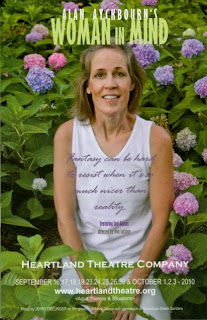 Alan Ayckbourn is one of my favorite playwrights. Critics sometimes complain that Ayckbourn’s plays are too commercial, too light, too funny. I like the funny. But what I really love is the heart and the depth. The humanity. I recognize the people he writes about, the well-meaning, regular old suburban types who are vaguely unsatisfied, longing for love or excitement or just to be paid attention to.

Those people are at the center of even his fizziest plays, like “Bedroom Farce” or “How the Other Half Loves,” and they definitely dominate “Woman in Mind.”

Susan, the woman at the heart of “Woman in Mind,” is incredibly recognizable. Everybody knows a Susan, someone in the midst of a midlife crisis, not really content with where her life has taken her, not really clear how to make things better. “Woman in Mind” is labeled a comedy in all the play indexes out there, and there are definitely funny bits in it. Ayckbourn has a hard time not sending up the foibles of foolish people and the comic timing he creates is always impeccable. But even so… It’s hard not to see the sadness all through “Woman in Mind,” even when the jokes are flying fast and furious or the action is getting a little crazy.

It sounds like a funny idea, that a woman unhappy with her real family would invent a new, better one, with a handsome, devoted husband, a loyal brother and a beautiful daughter who cavort about in tennis whites and offer champagne at every turn. But Susan’s fantasy world teeters on the brink of something pretty scary, and because the play is in her point of view, we can’t help but worry over her mental health every step of the way.

Heartland Theatre’s production of “Woman in Mind,” directed by Don LaCasse, Professor of Theatre and former Director of the School of Theatre at ISU, does find the comedy, but the longing, the confusion and the heartbreak are definitely there, too. If you’re not feeling absolutely wrenched by the end of the play, well, I just don’t think you’re human.

That’s due to LaCasse’s deft direction – he seems to have concentrated on finding the emotional truth in all the characters, even the fantasy ones – and also to the actress he cast as Susan. The role is hugely challenging. Susan is not only on an emotional roller coaster, but also on stage every single minute of the play. Lori Adams, who heads the undergraduate acting program at ISU, gives Susan all the spark and depth she needs to pull us in and keep us riveted. Ayckbourn’s topsy-turvy plot keeps changing things up, showing us more, setting things up and paying them off, and Adams navigates all of that beautifully.

Susan needs both her awful real family and her charming fantasy folks to show us who she is and why she is who she is. Todd Wineburner, Carol Scott and Jonathan Davis do an excellent job of providing humor as the rigid vicar husband, awful sister-in-law and son who hasn’t spoken to her in two years. I actually felt sorry for Wineburner’s version of the terrible husband who doesn’t really see or hear his wife, and that is no mean feat.

The fantasy folks, with Dave Krostal as a much dishier husband, Jake Olbert as the brother who would do anything for her, including shooting whoever she wants, and Amanda Serianni as the sweetest, prettiest daughter in the world, are just as good, initially providing the support Susan needs, but then galloping out of control, too. I was very impressed with Olbert, who managed a sort of cheeky weirdness that really fit the bouncy brother of Susan’s imagination.

As the doctor who comes to tend Susan, the one person who straddles both worlds, Dean Brown is called upon to be kind, hapless and a bit dithery. He manages nicely, adding a generosity of spirit that makes Dr. Bill the one person we can really like without reservation.

Michael Pullin’s scenic design makes a lot out of the small space at Heartland Theatre, with a basic lawn up front and a backdrop with rain and lightning, while Nikki Wheeler’s costume design is excellent, outfitting a lot of British stereotypes in a way that we still get who they’re supposed to be. The costumes in the ending sequence, where a wedding inexplicably turns into a horse race, are extraordinary.

I love this play. I am so pleased to be able to see it come off so well in a local theater. “Woman in Mind” just happens to suit Heartland’s mission – those familiar words about exploring the human condition – to a T. Not an easy play. Not an easy production. But so worth it.
Posted by JulieK at 9:13 PM