The Back Porch Plays at Heartland Theatre 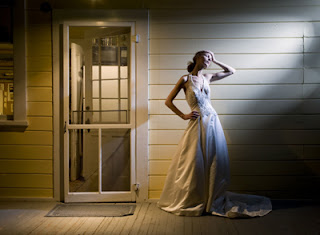 THE BACK PORCH
Everybody pretty much knows already that I love the ten-minute play form, right?

Playwrights who are good at ten-minute plays can say a lot in a short amount of time, they can define character and draw a plot, they can pull you in with their cleverness or their poetry or their humanity, sell you on what they have to say, and pay it all off… Within ten minutes.

Pretty amazing when it all works.

Heartland Theatre has been putting on an evening of ten-minute plays every year for the last ten years, and I have been a part of that, chairing the committee that selects the plays and sticking my fingers all over the process wherever anybody gives me a chance. With that caveat out of the way, I still go to the performances every year with some trepidation. After all, what we read on the page is not at all what shows up on stage. The directors and actors and designers bring their own talents and vision to the script, and suddenly, it’s something quite different than the script we saw back in December.

This year, in honor of the very first year, when the theme for Heartland’s play festival was the front porch, the theme was the back porch. That means all eight plays chosen from among the 226 entered are set on a back porch, and the judges considered how well they explored that theme when choosing them.

I will tell you that a whole lot of playwrights apparently think “back porch” and immediately conjure up ideas about funerals and dead people. No clue why that is. I, personally, think of Andy and Aunt Bea. (Not dead.) But nobody else went with Mayberry. Instead, as I said, we saw lots of dead people and funerals, and that is at least partially reflected in what’s on stage right now.

In performance, both local playwrights’ work stood out in a very good way. Joe Strupek and Bruce Boeck, both from Bloomington-Normal, contributed “Don’t Forget to Play My Numbers” and “Crickets,” and both plays came off very well, with sharp performances from Todd Wineburner, Kevin Paul Wickart, Dave Lemmon and Gayle Hess, and excellent direction from Marty Lynch and Kenneth Kendall, both first-time directors at Heartland.

Another first-timer, Jennifer Lumsdon, did very nice work directing Teesue H. Fields’ “Colored Entrance Around Back,” casting a harsh light on the 1950s in a negotiation between a young white housewife and the African-American maid she’s thinking of hiring. Sarah Stone Innert and Claron E. Sharrieff managed the subtle twists and turns in Fields’s script with quiet intensity.

Misti Sommers, who has acted and directed in Heartland’s 10-Minute Play Festival twice before, also came in strong, taking the reins on Andrew Bailes’ “When She Danced,” featuring another terrific performance from Todd Wineburner, who showed good chemistry and warmth with newcomer Aaron Thomas as his son.

“Bedtime Story,” by Christopher Lockheardt, directed by John W. Kirk, opened the show on a more poetic turn, as actors Nick McBurney and Cristan Embree circled around a story of past lovers who had never quite managed to hit happily-ever-after, and “Too Many Air Conditioners,” by Thomas Mollica, directed by Chris Gray, closed it with a murky memory piece about a grandmother, played by Ann Bastian White, who is at a place where nothing in her life is all that clear. Misti Sommers and Lisa Ankenbrand rounded out “Air Conditioners” as a granddaughter who isn’t all that good at dealing with Grandma and a helpful nurse doing her best. By the time Grandma turned to go inside, ending this year’s 10-Minute Play Festival, the audience was right with her in a poignant moment, feeling her confusion and sadness.

As a reader, I felt this year’s crop of scripts was one of the strongest we’ve fielded, and I love the fact that two of the best were from local authors. But then again, I love a good ten-minute play!

When She Danced
By Andrew Bailes

How to Weed Your Garden
By Jerry McGee

Don’t Forget to Play My Numbers
By Joe Strupek

Colored Entrance Around Back
By Teesue H. Fields