I haven't seen any formal announcement, but I did notice that ISU's Department of Theatre sneaked the upcoming 2011-12 season into the back of the program for Sam Shepard's "The Tooth of Crime." Maybe they want us all concentrating on the Shakespeare Festival, which opens this week, and not thinking about fall or winter shows till it's their turn?

At any rate, this is what ISU's upcoming season looks like, according to that "Tooth of Crime" program:

THE WOMEN OF LOCKERBIE by Deborah Brevoort, opening September 29 in the CPA

THE MERCHANT OF VENICE by William Shakespeare, opening September 30 in Westhoff Theatre

A FLEA IN HER EAR by Georges Feydeau, opening November 3 in the CPA

THE MARRIAGE OF BETTE AND BOO by Christopher Durang, opening November 4 in Westhoff Theatre

PASSION PLAY by Sarah Ruhl, opening February 23 in the CPA

LA BOHÈME by Giacomo Puccini, opening April 5 in the CPA 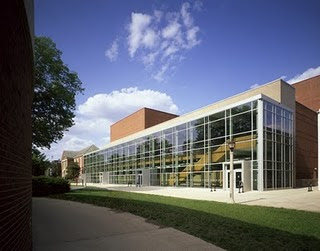 That's the CPA, above, in a photo by Pete Guither.

Looking over this season, I'd say they're going for a nice balance of big shows and small shows, classics and newer pieces, with an emphasis on heavier work and just the Feydeau farce on the lighter side.

Personally, I'm most excited about Sarah Ruhl's "Passion Play" -- I've read it and I think it's a fabulous script with a ton of potential in the right hands. This sprawling story of three eras of Passion Plays, performed in England during Elizabethan times, in Oberammergau, Germany under Hitler, and in North Dakota with Ronald Regan as president, is magical, mystical, strange, creative and clever, and I found it an amazing read. I can't wait to see what ISU does with it.

I'm not sure I understand why the Department of Theatre schedules shows in the Center for the Performing Arts and Westhoff on back-to-night nights, but I'm sure they have their reasons. It makes it tough on theater-goers, though.
Posted by JulieK at 11:42 AM