The Fred and Adele Astaire Awards 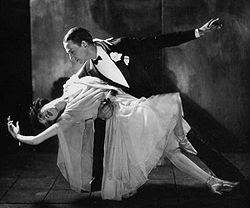 On May 15th, the annual Fred and Adele Astaire Awards, presented for excellence in stage and film dance achievement, were handed out in New York City.

These awards began in 1982 as simply the Astaire Awards, to "recognize outstanding achievement in dance on Broadway each season." Since then, they've expanded to recognize dance achievement on film, too.

After seeing this year's announcement of winners, my friend Jon wondered if there were a complete list of all the winners since 1982 compiled somewhere. Although both of us have done our best to locate such a list, we have come up empty, I'm afraid. By searching for each year's press release individually and noting what history was mentioned in those press releases, I have compiled a sort-of list, semi-accurate, with holes and weird overlappings. Oh, well. This is what I got:

1987: Robert Lindsay, Best Male Dancer for “Me and My Girl”
Hanya Holm, Special Award for Contribution to Modern Dance and the Broadway Stage

Yes, I'm aware that my list is strange in spots, like giving an award to Michael Bennett for “A Chorus Line” in 1982. But if not then, when? I’m also missing the female in 84, male, female and choreographer in 85, I have an extra choreographer in 86, no choreographer or female in 87, no female in 88, nobody in 89, no female in 92, no males in 93 or 95 (plus I have Charlotte d’Amboise and Scott Wise in different years for the same show), and then the issue of 2006 and 2007, when apparently no awards were given out. I found an article in 2008 that said there had been no awards for three years, but since the 05 stuff seems pretty clear, I think it was just two.

So there’s what I found with my internet searches and cross-referencing hither and yon and whatever else I could get my hands on. Neither theastaireawards.org nor tdf.org seems to have any kind of historical listing and no one responded to my email request for more information. I'm hoping there is someone else out there looking for this exact same thing who will see my sad, holey list and decide to take this on as a project. Fred and Adele Astaire deserve better! And so do the recipients of these awards over the years.
Posted by JulieK at 10:41 AM