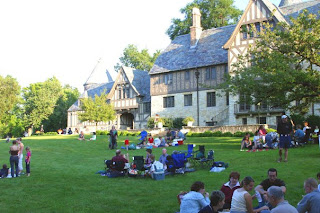 The Illinois Shakespeare Festival at Ewing Manor (pictured above) always has the potential to create magic. There's just something about the evening sky settling around the stage as an evening of Shakespeare wears on, with the performers and the magical words they speak lighting up the darkening night.

"Romeo and Juliet" may be a tough one to keep finding magic in, however, mostly because we all know the story and it's hard to give it a new spin.

Arthur Laurents and Jerome Robbins certainly spun it differently in "West Side Story," which gets brought up here in a Jersey Shore pre-show take-off that manages to be funny and diverting green show entertainment even if, like me, you're not all that familiar with "The Jersey Shore." Plus it gives a couple of extra actors something to do. I'm pretty sure I recognized ISU students Colleen Longo and Eliza Morris working hard as those two Joisey girls.

However much I maintain that it's not my favorite, still, "Romeo and Juliet" seems to get picked again and again to represent Shakespeare. Long before "West Side Story," it was the play Charles Dickens chose for Nicholas and Smike to get sucked into in "Nicholas Nickleby." That led to a memorable (and hilarious) version, complete with happy ending, in the Royal Shakespeare Company's epic "The Life and Adventures of Nicholas Nickleby." Yet another generation jumped on board when Baz Luhrmann put Leonardo DiCaprio and Claire Danes in his revolvers-and-swimming-pools 20th century take called "Romeo + Juliet." And then there's Joseph Fiennes and Gwyneth Paltrow playing Will Shakespeare and a fictional lover rehearsing and performing the play at the Globe in front of Queen Elizabeth in "Shakespeare in Love."

This time out, director Doug Finlayson and his costume designer, Linda Pisano, mix modern elements -- black jeans and hoodies here, Chuck Taylors and a backpack there -- with leather jerkins and swords, and, of course, Shakespeare's language, to mingle the old and the new, the then and the now, to mostly good effect. The musical elements are also a mix, and except for using Katy Perry's "Teenage Dream" one too many times, that works for me, too.

Finlayson's staging creates some lovely visuals on Michael Franklin-White's set, which manages to look cozy and imposing, all at the same time. R. Lee Kennedy's lighting design adds mood and depth, as does the darkness that descends around our star-crossed lovers as the night wears on.

As Romeo and Juliet, actors Dylan Paul and Laura Rook (shown below) look very good and speak with clarity and purpose.

Paul is especially good at communicating Romeo's tempestuous youth and overwhelming passion, and I found him both moving and appealing throughout. Rook has the right look for young Juliet, but she has a maturity and thoughtfulness in delivery that tends to undercut her credibility as a reckless teen. Still, she looks lovely when her Juliet shows up at the party in bright pink hightops and wings (a nod to the Luhrmann movie?) and you can certainly understand why Romeo would abandon his previous crush for this girl.

Their performances, as well as the stagecraft supporting them, mean that the balcony scene and the final tomb section are especially vibrant in this production.

All in all, this is a lush, luminous "Romeo and Juliet," brimming full of young love and crashing swordplay. And some truly wonderful stage pictures.

ROMEO AND JULIET
By William Shakespeare

Running time: 2:50, including one 15-minute intermission.

Performed in repertory through August 6.

For tickets and other information, visit the Illinois Shakespeare Festival website here.
Posted by JulieK at 2:40 PM