June Is Here, Ready or Not! 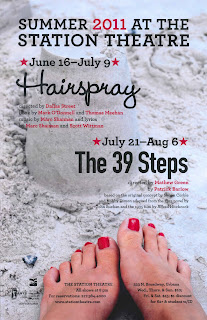 No, I have not forgotten June. Yes, I'm late. I had this little foot surgery on May 31, and I assumed I would be lounging around with my foot up, but otherwise well able to tell you all about what's happening in June.

I am going to keep this brief (my attention span not being all that great) and race through some June options. Because there are a lot! And I don't want you to overlook them just because my computer access is awkward and my foot is killing me. If you want to forgive typos and any other weirdness due to my foot, though, that would be awesome.

First up, U of I's summer rep (of sorts) opened last night with [title of show], a little musical about trying to create a musical when you don't even have a name for it. [title of show] continues tomorrow and next Saturday, and all the way through June 26th. The other shows in Krannert's Summer Studio Theatre are Peter Parnell's QED, opening Wednesday, June 8, and running through the 24th. And the third show is Noel Coward's crazy "Blithe Spirit," where a mischievous ghost from the past inserts herself into her husband's new marriage. "Blithe Spirit" runs from July 7 to 23.

Heartland Theatre Company brings back it annual 10-Minute Play Festival, this time on the theme "The Back Porch" on June 9th, with performances all the way through July 2. Heartland considers the 10-Minute Playfest as the first show of its season, which means lots of subscribers eager to use their new flex passes fill the seats. It's a very popular offering for Heartland, with eight brand-new short plays written by playwrights from all over the country. To make reservations or read more about this year's winners, check out the website here.

The Station in Urbana launches its summer season with "Hairspray," opening June 16. How can you fit the big, bodacious musical that is "Hairspray" inside a small black box like the Station? I don't have a clue! Read more about it here.

The Illinois Shakespeare Festival opens its own summer rep June 23rd with the Reduced Shakespeare Company's "Complete Works of William Shakespeare (Abridged)," a show that was a huge hit for the ISF in 2008. It will once again be directed by Bill Jenkins. "Romeo and Juliet" opens on the 24th, and the third show, "The Winter's Tale," bowing July 14. For all the details on tickets, backstage tours, jazz in the courtyard and other possibilities, check out the ISF website here.

John Wayne and Elizabeth Taylor also visit the Normal Theater, and the New York Philharmonic's "Company" (including Neil Patrick Harris and Stephen Colbert in a star-studded cast) comes to Bloomington's Galaxy 14 on June 15.
Posted by JulieK at 11:51 AM