Auditions: IT'S A WONDERFUL LIFE (the Radio Play) at Community Players

Is It's A Wonderful Life your favorite holiday movie, or maybe even your favorite movie of all time, holiday or otherwise? If you answered yes to that question, Community Players is calling your name with It's a Wonderful Life: A Live Radio Play by Joe Landry. This is a new version of the perennial holiday classic, written as if it were a 1940s radio play, including whiz-bang sound effects. Actors will presumably stand in front of big, standing microphones to give it all radio-real authenticity. 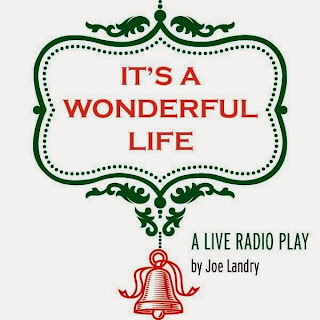 Auditions to be part of It's a Wonderful Life: A Live Radio Play will take place this Saturday and Sunday, October 26 and 27, at 7 pm. Director Sally Parry and producer Dorothy Mundy will be looking for between five and seven actors. The actors who play George and Mary (Jimmy Stewart and Donna Reed on screen) will take on both the younger and older versions of the characters, and the other members of the cast will play multiple roles, with the exception of the sound effects operator, who plays a very important part in a radio show.

Community Players' auditions information says: "There will be a lot of reading from the script to see how well actors can move among different roles and voices. This show is sure to be an audience favorite and should be both fun and challenging for those involved."

It's a Wonderful Life: A Live Radio Play will take the stage at Community Players from December 12 to 15, with four performances. This is considered a "lab show" and not a part of the regular season.
Posted by JulieK at 6:33 PM

Email ThisBlogThis!Share to TwitterShare to FacebookShare to Pinterest
Labels: Community Players, It's a Wonderful Life