This may be my most colorful blog post ever, what with the film rainbow to the right and the eye-popping I'm So Excited poster below. And why not? It's time for Your Normal LGBT Film Festival at the Normal Theater!

The 2013 version of this event brings six films to the Normal Theater with a mission "to create a showcase for lesbian, gay, bisexual, and transgender stories and arts to entertain, inspire and grow the number of central Illinois fans and champions."

So what's the lineup this time out? Last night's opening film was Break Through, a 2012 documentary focusing on a group of kids putting on a show that explores issues of equality and acceptance for lesbian, gay, bisexual and transgender youth in the United States, and how much this particular group of actors learns by staging their play. Think Boal/Theatre of the Oppressed/Theatre for Social Change and you'll be on the right track. 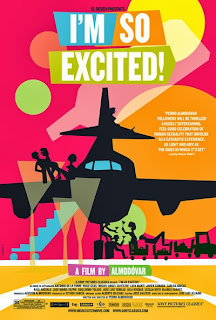 Tonight's choice is a comedy -- a light-hearted look at a possible plane crash -- from Spanish director and writer Pedro Almodóvar. In I'm So Excited, Almodóvar takes us aboard an aircraft that just may be headed for disaster, as the crew in the cockpit tries to fix things, and the crew in the cabin dances as fast as they can to keep their passengers happy. Sleeping pills! Virgins and whores! Sex, love and the Pointer Sisters! Remember, it's Almodóvar, so its character are bound to be colorful and a little crazy. And it's tonight at 7.

Friday's flick moves into more reflective territory, with Reaching for the Moon, a beautiful and beautifully tragic love story about American poet Elizabeth Bishop and Lota de Macedo Soares, a Brazilian architect she met in the 1950s. The two women are opposites in some ways, but both strong and fiercely creative, and their relationship on film becomes "an empowering portrait of two highly gifted women who defy social convention," according to Deborah Young in The Hollywood Reporter.

In Ian Harvie: Superhero, a transgender stand-up comedian who just happens to be named Ian Harvie offers funny, fresh insights on how he got to where he is, a "self-made man" who is very comfortable in his own skin. This documentary/concert film gives a behind-the-scenes look at the comedy stylings and life and times of Ian Harvie. You can see the trailer for the film here, and then come out to the Normal Theater at 4 pm on Saturday, October 19, to catch the whole Superhero experience. 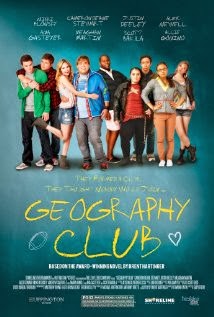 Although stars like Scott Bakula (Quantum Leap, Star Trek: Enterprise, Behind the Candelabra) and Ana Gasteyer (Saturday Night Live, Suburgatory) provide an adult presence in Geography Club, a film from twin brothers Gary and Edmund Entin (Gary directs, while Edmund wrote the screenplay), the movie is based on Brent Hartinger's best-selling YA novel, and the YA plot is the focus. Geography Club refers to the front group formed by a few high school kids who feel they don't belong in their school. They've come up with this "geography" club, hidden behind a boring name but providing them with a support group right under their homophobic peers' noses. Geography Club hits the screen at 7:10 pm on Saturday, with a short called P.D.A. that is, indeed, about public displays of affection, at 7.

A different abbreviation -- G.B.F. -- forms the title for the last movie in this year's Normal LGBT Film Fest. What does it stand for? Gay Best Friend, of course. Like Geography Club, it's about how gay kids carve out a space in a high school setting, or, as Gawker's Rich Juzwiak puts it, G.B.F represents "director Darren Stein's latest movie of high-school clique absurdity." The GBF in question is a gay boy named Tanner, who finds himself a hot property as a potential BFF to the popular princesses atop the social pyramid at his school. G.B.F. plays at 7 pm on Sunday, October 20.

Although G.B.F. finishes up the official schedule of movies, there is an after party at the Firehouse Pizza Pub down the street, with music provided by Stone and Snow. See details on the banner below.