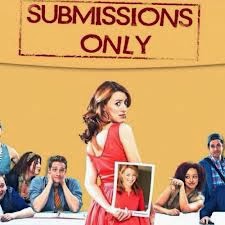 There are a lot of web series out there about show biz, probably because actors are so often out of work, so they're looking for something to do. Creating a series for the web means they can play whatever they want and build their career frustrations right into the story. That means there's a sameness to the storylines -- terrible auditions, vain and crazy theater folk, terrible luck getting a break -- but also some funny, talented people who really do deserve that break.

Submissions Only is the cream of the backstage web series crop, or the cream of the ones I've found, anyway. It involves a hapless actress named Penny Reilly, whose best friend is a casting director. That means Penny, who is played by Submissions Only co-creator Kate Wetherhead, frequently sits in on auditions as a reader when she's in need of a buck between gigs. That means we run into all sorts of Broadway stars who are supposedly auditioning for thing, and there are running gags about the insanity of the audition process in general. Penny has romantic problems, too, as does her friend the casting director, whose ex is Penny's agent, as both the casting guy and his ex match up with new boyrfriends. The adorable Santino Fontana, the new "It" boy of the American stage, plays Aaron, also an aspiring actor and a romantic interest for Penny, although they have never really been in the same place at the same time to make the connection.

Others in the regular cast include Colin Hanlon as Tim, Penny's best friend; Stephen Bienskie as her agent Steven; Asmeret Ghebremichael as her supportive roommate Raina; Randall Moody as a cheerful newcomer to the audition business; Max Von Essen as Steven's gorgeous new boyfriend, and Donna Vivino as Serena, a self-absorbed actress who has been Aaron's girlfriend and is now starring in a new show with Penny.

And now it's time for Season 3. Well, almost. A trailer has been released, with the tease that new episodes will be coming soon, but no exact timetable. Come on, Submissions Only! Get those new episodes here now!

In the meantime, you can watch the trailer here or catch up on the other 14 episodes if you haven't seen them yet.

Here's how Kate Wetherhead and her partner in the series, Andrew Keenan-Bolger, describe their show:


Created in 2010 by New York actors Kate Wetherhead and Andrew Keenan-Bolger, "Submissions Only" is a grassroots web sitcom that shows viewers what really goes on off stage. Following the friendship of two theater professionals, an actress (Kate Wetherhead as Penny Reilly) and a casting director (Colin Hanlon as Tim Trull), as they try to build careers in the notoriously tricky and often absurd world of Broadway theatrics, "Submissions Only" proves there's a whole lot of comedy in all the drama.

Submissions Only is far and away the best of the web series devoted to theater, but there are others. If you want to try some out, or if you're desperate for something to see while you wait for Submissions Only to get back, you might try:

It Could Be Worse. A scatalogical look at the seamy underside of going for a career in theater in New York, It Could Be Worse stars Wesley Taylor, who played Bobby on the TV show Smash and also appeared as the nice boyfriend in The Addams Family musical. I hated it. Its focus on bathrooms and bad behavior is just not me.

City of Dreams. Come on, kids, let's put on a show! Three plucky kids hit NYC but never get cast, so they fake a musical called The Ballad of Ovagina. "Oh, vagina, oh, won't you cry for me, cause I've come from Alabama with my banjo on my knee..." No, that's not what they perform. Instead, they get Laura Osnes to sing a song (something about windows) and shed a single tear perfectly on cue. Osnes is lovely, but the rest of the show... The three main children are annoying with no redeeming qualities that I can see, and, as the friend who told me about this series said, it's about "Young kids trying to make it, and I'm thinking, maybe not everybody SHOULD make it."

Theater People. Set in the theater-crazy world of Minneapolis-St. Paul, Theater People uses all kinds of talented Twin Cities actors to fill out plots that seem like it was inspired by the Canadian series Slings and Arrow, with its messy romances and insane directors. There's no ghost, however, and most of the characters are really, really annoying. Especially serial cheater David, whose ex-wife is directing him as Romeo (a really old Romeo) in a misguided production of Romeo and Juliet. There's an awesome cat video if you get all the way to the end, however.

The Reel Housewives of Theatre West. Did you know there's also theater in LA? I mean, not just movies, but also theater? The Reel Housewives of Theatre West takes you there, looking at actresses who've gotten too old to get roles but are still working at a mediocre theater. There's a ventriloquist character who always carries a puppet and talks to and through it, which I almost always hate. But if you can't get enough of Nunsense and Menopause the Musical, this just may be the show for you.

Backstage Drama. This one involves a framing device of a cute New Jersey guy who gets put in witness protection as a janitor at a small regional theater in "Grand River, Michigan" with a boatload of crazy people working in their version of show business. This series was created to benefit regional theaters, and only the first few episodes are available for free. I'm sorry because its heart is in the right place, but it's terrible. The acting is awful, the editing is amateurish and confused, and the writing is just beyond sad.

If you've found a backstage web series I should see, let me know. Otherwise I'll just bide my time and wait for Submissions Only.
Posted by JulieK at 1:38 PM