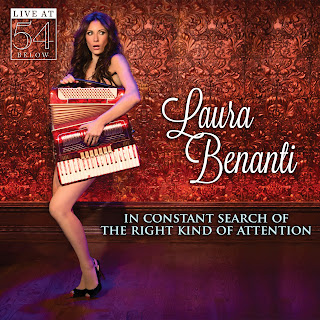 Laura Benanti is one of those people. You know what I mean. Beautiful, gorgeous voice, spark and sparkle for days, and she doesn't seem to take herself too seriously.

She also adds something special to all her projects, whether that's Broadway's Into the Woods revival (she was Cinderella, of course), taking over for Rebecca Luker as Maria in The Sound of Music, acting as Antonio Banderas's muse in Nine or Matthew Perry's foil on TV in Go On, giving The Playboy Club more class than it deserved, enlivening Women on the Verge of a Nervous Breakdown, or making Louise seem like a whole new person in Gypsy opposite Patti Lupone. Benanti won a Tony and a Drama Desk for Gypsy, and she was nominated for Into the Woods, Swing! and Women on the Verge of a Nervous Breakdown. She just released a live album called "In Constant Search of the Right Kind of Attention" that serves as a record of her performance at New York's 54 Below and she will be appearing as Sherlock's first "killer" on CBS's Elementary.

So about that album...

Benanti's infectious personality is on full display in the segues between songs, and her amazing voice elevates a range of songs. You may be expecting more Broadway than what you get -- she has a taste for folk-pop material from the likes of Joni Mitchell and Harry Chapin as well as a couple of things she wrote herself when she was young -- but what you get is quite wonderful.

Her way with "My Time of Day" from Guys and Dolls is exquisite, "On the Street Where You Live" from My Fair Lady becomes "On the Street Where I Lived" and an entry point into Little Laura's childhood, and I can't tell you how pleased I am to hear her sing "Unusual Way," one of my favorite songs from Nine, straight up, without the Italian accent that put a fly in the ointment of the Broadway cast album. When you hear "Model Behavior" from Women on the Verge, you will understand the Tony nomination for that one, too.

Benanti also shines on "He Comes for Conversation," a Joni Mitchell song infused with light and color here. I think Benanti sounds more like Judy Collins than Joni Mitchell, but that's a good thing as far as I'm concerned. And the songs from Todd Almond, Benanti's musical director and accompanist, are lovely, as well.

All in all, this 54 Below cd comes off as light and charming, as effortlessly beautiful, as Laura Benanti herself. I'd like to know what the folks who were seeing her in person were laughing at at times, but that's just a teaser to try to catch her live. And isn't that a perfect way to make an album?

"In Constant Search of the Right Kind of Attention" is available on iTunes, from Amazon or at Broadway Records.
Posted by JulieK at 3:35 PM