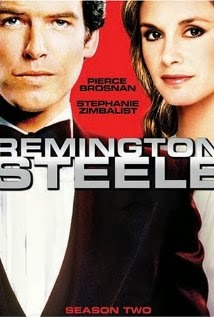 It's no secret that Remington Steele, the con man/private eye show from MTM in the 80s, is one of my all-time favorite TV shows. You ask and I'll say Remington Steele and Lou Grant, top two, all-time. I also admit that I was hooked on Remington Steele right from the beginning. Its premise was perfect for me, taking off when a smart girl named Laura Holt invented a boss, a man named Remington Steele, to front for her detective agency because clients didn't take her seriously as a female PI. And then a dashing con man/thief/movie fan took over the role -- against her protests -- because having an identity was useful for him. He was charming and looked good in photo opportunities, and she was capable, practical and sharp. I don't think we ever did find out what his real name was, but the two played cat and mouse, or maybe TV versions of Cary Grant and Katharine Hepburn.

Remington Steele launched the career of Pierce Brosnan, who played Steele with elegance and charisma, and carved out a niche for Stephanie Zimbalist, who gave Laura Holt conviction and intelligence, something in short supply among the big-haired bimbos on the small screen in the 80s. It also fueled my romance writing career, which began as the TV series neared its end. I didn't much like how they finished up the show, so I wrote my own sardonic heroes who fell for uptight smart girls, and put them in the plots I wanted, attempting to achieve that same kind of fizzy, funny, romantic tone.

I can lament all I want that Remington Steele went out on a lame note, but that doesn't mean I'm looking for a replacement. And if I were, I could've lined up behind White Collar, Hustle, Leverage or something else in that vein. You know, gorgeous guy, mysterious past, scams and thievery and heists.

But now comes the news that NBC is going for Remington Steele, the Next Generation. No, that isn't the real name. It's the idea, though, as Deadline reports that NBC has optioned the rights to a new version of Remington Steele, not an hour-long mystery/suspense show, but a half-hour comedy centered on the progeny of Remington and Laura, one Olivia Holt, who reopens the old agency and gets herself involved in "the same hilarious, action-packed, romantic entanglements of her parents."

Sounds like... A really bad idea. It's not like you can go nab Natalie Portman or Michele Dockery, someone who looks like she could've sprung from the loins of Pierce Brosnan and Stephanie Zimbalist and displays a modicum of brain power. I'm just afraid this "hilarious, action-packed" half-hour comedy would look more like 2 Broke Girls or Super Fun Night than the Mary Tyler Moores and Bob Newharts and Parks and Recreations of the world. How do you set up and solve a mystery in a thirty minutes, including keeping a romance alive and adding enough jokes for the promised hilarity? Will it feel like Scooby Doo? And how will they explain where Remington and Laura are now? I can't imagine Pierce Brosnan making a guest appearance, although I suppose Stephanie Zimbalist might be willing to show up. If that's the case, will they trash the romance and paint Steele as a ne'er-do-well, a fly-by-night who dumped his wife and kid (which would explain why the daughter's last name is Holt) when he swanned off to steal the Five Nudes of Cairo one more time?

I'm skeptical. Let's just leave it at that. In the meantime, I'll stick with the Remington Steele DVDs.
Posted by JulieK at 8:38 PM