If you thought 2010 (the year composer and lyricist Stephen Sondheim turned 80) was full of everything Sondheim, look out for 2013 an 2014. There continues to be all kinds of Sondheim news, covering movies, concerts, stage productions and all-around Sondheim-mania. 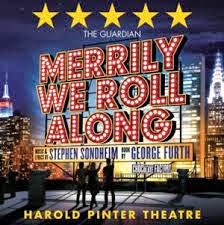 We've already discussed the fact that a filmed version of Merrily We Roll Along from London's Menier Chocolate Factory will be screened worldwide on October 23. You can check out the list of movie theaters offering this Merrily, which Mr. Sondheim called "not only the best I’ve seen, but one of those rare instances where casting, direction and show come together in perfect combination..." Around here you have a choice of Peoria or Champaign-Urbana (or more specifically, Savoy) as well as Rockford, fourteen Chicagoland locations, Indianapolis or St. Louis. In November, New York's City Center will host a special concert called "A Bed and a Chair: A New York Love Affair," featuring jazz trumpeter, composer, teacher and legend Wynton Marsalis, who has arranged and orchestrated some two dozen Sondheim songs for this event. Marsalis and the Jazz at Lincoln Center orchestra will perform these new versions of the songs alongside Broadway stars Bernadette Peters, Norm Lewis and Jeremy Jordan and jazz singer Cyrille Aimée. New York City Center has details for these November 13, 14, 15, 16 and 17 concerts, while Broadway World's Pat Cerasaro spotlights it here. (In case you're wondering, the title "A Bed and a Chair" is taken from the lyrics of "Broadway Baby," the same song in Follies that provides the title for this blog.)

A big-screen version of Into the Woods (music and lyrics by Mr. Sondheim, book by James Lapine) is also in the works, with Rob Marshall directing. Since Marshall was the one who made such a mess of Maury Yeston and Arthur Kopit's Nine, I am not holding out a whole lot of hope this will be anything to write home about, especially since the likes of Johnny Depp and Chris Pine have been cast in singing roles. Still, there's Meryl Streep as the Witch, which has possibilities. Having said that, I do not know if Streep's voice, which is decent, is up to the Witch in Into the Woods standards. She may be La Streep, but she's not Bernadette Peters, Julia McKenzie, Donna Murphy or Vanessa Williams. But I guess we'll find out how she fares in December, 2014, when the movie is scheduled to open. For some of the first pictures from the set, you can check out the Huffington Post's slideshow featuring Emily Blunt (the Baker's Wife), Pine (Cinderella's Prince) and Anna Kendreck (Cinderella) or a first look at Streep as the Witch. Note the curious lack of reference to Stephen Sondheim in either piece. Also note that Streep looks dandy as the Witch, although I am seeing something of a facial resemblance to Angela Lansbury, which I didn't expect.

And, as previously announced, Chicago Shakespeare Theatre on Navy Pier will continue its Sondheimian ways, with director Gary Griffin helming both Gypsy, with Broadway's Louise Pitre (Mamma Mia) as Rose, the total stage mother package, and Road Show, a picaresque piece about the legendary Mizner brothers and their part in America's boom and bust in the early decades of the 20th Century. Performances of Gypsy begin in February 2014 in the Courtyard Theater while Road Show starts up in March 2014 in Chicago Shakespeare's Upstairs space.
Posted by JulieK at 12:02 PM

Email ThisBlogThis!Share to TwitterShare to FacebookShare to Pinterest
Labels: A Bed and a Chair, Company, Into the Woods, Merrily We Roll Along, Stephen Sondheim, Wynton Marsalis