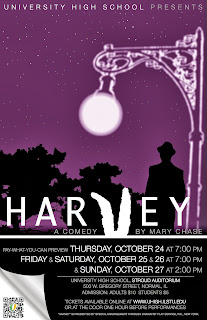 Normal University High School will open the classic comedy Harvey by Mary Chase tonight at 7 pm. Harvey is a fun show about a kind but eccentric man named Elwood P. Dodd who has a best friend that only he can see. Elwood's invisible companion happens to be a 6-foot-3 "pooka," resembling a human-sized rabbit, named Harvey. But Veta, Elwood's sister, isn't thrilled by his unconventional idea of a best pal, and she argues that Harvey is prima facie evidence that Elwood belongs at the funny farm.

Harvey is often performed at high schools and community theaters, and its good-natured message about how much more interesting life is if we support the eccentricity in our midst never goes out of style. U High's production is a little different, however, in that, as the first production of their season, it's hoping to help pave the way for a trip with a different play to Edinburgh's Fringe Festival late next summer. While that's a great opportunity for U High students, it's also expensive, as you might imagine.

Right now, everybody at U High, including the cast and crew of Harvey, is working very hard to raise funds for the trip. And you can help them out! You can attend opening night tonight at U High's Stroud Auditorium, or get out to the Friday or Saturday night performances, also at 7 pm, or the Sunday matinee at 2 pm. Your ticket price ($10 for adults and $5 for students) helps them out, as do any extra donations you'd like to make.


"University High School Theatre and Thespians- present the Pulitzer-prize winning comedy Harvey by Mary Chase as their 2013-14 season opener. This heart-felt comedy of errors features U-High senior Sullivan Peterson-Quinn as Elwood P. Dowd, an affable man, who claims to have an invisible friend - a 6', 3'' tall talking rabbit named Harvey. Performances are Friday and Saturday, October 25th-26th at 7pm and Sunday, October 27th at 2pm in Stroud Auditorium. Tickets are $10 for adults and $5 for students and can be purchased at the door or online here."

I don't often publicize high school theater events, but I love Harvey as a play (the 1950 movie with James Stewart is pretty fun, too), Ben and his wife Rachel are local theater artists whose work I enjoy, and I think it's a great idea to support a high school theater program hoping to send kids to Scotland.

Keep an eye out for other U High fund-raising events between now and next summer, but in the meantime, get out to Stroud Auditorium this weekend!
Posted by JulieK at 1:36 PM