Do you already have your tickets for this year’s Discovery Walk at Evergreen Cemetery? If not, why not? Performances begin on Saturday at 11 am, and you can buy those all-important tickets at the Garlic Press, Evergreen Memorial Cemetery or the McLean County Museum of History. Prices range from $4 for children and students with ID to $10 for museum members and $12 for the general public.

So what is the Discovery Walk? Well, it’s like Bloomington-Normal history brought to life. If you’re like me and not originally from McLean County, you may not know that there was a very special zookeeper at Miller Park Zoo for years and years, or that the Children’s Foundation at 403 S. State Street was once called the Morgan home, or that Sweet Home Mission was built on the site of a former pork packing plant. All that plus cigars, a life-size puppet, a corrupt mayor, a woman known as Dame Fashion Smiles, a very depressed woman who gave birth to a presidential candidate, and a brilliant inventor with vision problems who made a fortune off a device to open gates. 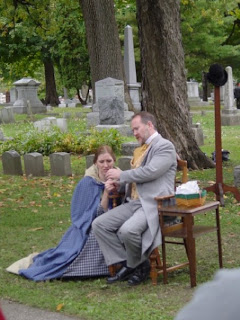 Rhys Lovell and Christine Cummings portray Allen
and Sarah Withers in last year’s Discovery Walk.
The theme of this year’s walk is overcoming adversity, as all these characters faced major obstacles in their lives. Here’s who you’ll meet:

Grace Jewett Austin (b. January 12, 1872 – d. September 27, 1948) Amateur playwright and poet, fashion dame and Pantagraph reporter, Grace Jewett Austin wrote about who was marrying whom, who just got back from where, who went to what party, and who wore what to women’s club meetings. Portrayed by Irene Taylor.

Daniel T. Foster (b. July 22, 1841 d. October 13, 1920) Foster was a larger-than-life Civil War soldier, the owner of a local omnibus and carriage line, a raiser and racer of horses and mayor of Bloomington. But that was before he was indicted for aiding a prisoner to escape and malfeasance in office. Portrayed by Todd Wineburner.

Christoph Mandler (b. April 23, 1858, d. December 6, 1949) What do you make of a gregarious German cigar maker who loved to sing and dance (with Mathilda, no less) and entertain all within the sound of his voice? Why, just relax and enjoy the show, of course. Portrayed by Michael Pullin.

Lucy Orme Morgan (born January 21, 1858 died February 27, 1944) As a suffragist and ardent supporter of social support systems, Lucy Orme Morgan raised funds and kept homes for needy and homeless children up and running in good times and bad. She was a child of privilege, yet she looked out for those born with far less. Portrayed by Julie Kistler.

Willis Stearles (b. January 21, 1890 d. April 3, 1956) It’s tough to sort out what is truth and what is myth about this World War I veteran, a member of the famed “Black Devils” regiment, who became a beloved zookeeper at Miller Park. A Griotte will attempt to discover the truth behind the stories in this two-character scene. Willis Stearles will be portrayed by Bob Thurmond, with Tori Allen as the Griotte.

Helen Davis Stevenson (b. September 17, 1869 d. November 16, 1935) The Stevenson family is legend in Bloomington-Normal. Helen Davis Stevenson came from one prominent family and married into another, yet her marriage was anything but blissful. Helen had to cope with her husband’s frequent absences, two strong willed children, and her own frailties. Portrayed by Kathleen Kirk.

William Van Schoick (b. August 2, 1829 d. July 24, 1899) He was one of the founders of the Bloomington Pork Packing Co., the largest and most successful meatpacking company in town. How would you have liked to live in the neighborhood with all those awful smells? How did he deal with running a business that his neighbors hated? Portrayed by Ron Emmons.

William R. White (b. December 22, 1844 d. July 10, 1906) He spent the first eight years of his life in near darkness, yet he became a teacher and prize-winning inventor with 60 patents to his name. How did William White turn darkness into the light of invention? Portrayed by Rhys Lovell and Don Shandrow in select performances.

Yes, that is my name next to Lucy Orme Morgan. I have written for the Discovery Walk in the past, and I have served as a guide, but this will be my first year as an actor. Lucy was an amazing woman, and I hope I can do her justice.

I invite you to come out to Evergreen Cemetery on Saturday or Sunday, this weekend or next, and join one of the groups leaving at 11 am or 1 pm, and you will see me in my maiden voyage as a Discovery Walk actor. If you’re really lucky, you will get into one of the groups led by my husband, who will be acting as a tour guide at some performances.

The Discovery Walk represents a collaboration among the McLean County Museum of History, Illinois Voices Theatre and Evergreen Memorial Cemetery, with a ton of volunteer effort on all fronts. If you need more information, you may call 309-827-0428 or visit the McLean County History Museum at 200 N. Main Street in Bloomington.
Posted by JulieK at 8:18 PM