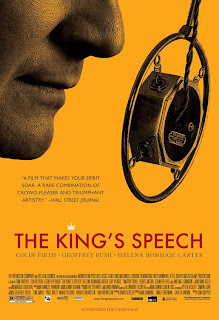 I am a day late with my April preview because I happen to be in Louisville, Kentucky, at the 35th Annual Humana Festival of New American Plays at the Actors Theatre of Louisville. That means I am watching some ten plays, long and short, unfold this weekend, and a big chunk of my blog through April will be talking about what I saw and what I thought about what I saw. I hope that's something to look forward to!

In other news closer to home, "The King's Speech" continues through tomorrow, April 3, at the Normal Theater. This Oscar winner for Best Picture won hearts and minds with its mostly true story about Britain's King George VI, thrust onto the throne when his older brother decided to abdicate to marry "the woman I love," an American divorcee named Wallis Simpson. That left a king with a speech impediment on England's throne with war looming and his people in need of a leader who could inspire them with his speech.

Tom Stoppard's "Rock 'n' Roll," about the power of rock music to inspire revolution and reform, also continues as April moves on, with performances on April 6, 7, 8 and 9 at 7:30 pm and tomorrow at 2 pm at the ISU Center for the Performing Arts.

Illinois Wesleyan's School of Theatre Arts is using its Faculty Choreographed Dance Concert to strive "to address the overarching theme of homelessness" with a dance event called "Monkey Trail," presented at IWU's McPherson Theatre April 5 to 9 at 8 pm and April 10 at 2 pm. Director Jean MacFarland Kerr, Associate Professor of Theatre Arts, has designed this evening of music, dance and multi-media effects. "All materials used as reinforcement throughout the production derive from the director's own experiences working with two homeless shelters in St. Louis during the summer of 2010," offers the press release. For more information, you can visit the Facebook page created for the event.

The Celebration Company at Urbana's Station Theatre offers "The Light in the Piazza," the lovely, lyrical musical about a 1950s American mother and daughter who must confront change when they vacation in Italy. The show won six Tony Awards in 2005, including one for Adam Guettel's complex, romantic music and lyrics. "The Light in the Piazza," directed by Michael John Foster, opens April 7 and runs through the 30th, with all shows at 8 pm.

Over in Eureka, they'll be performing the Maltby and Shire musical revue "Closer Than Ever," a really adorable show that looks at all different kinds of relationships in the modern world, April 12 to 16 in Pritchard Theatre at Eureka College. "Closer Than Ever" won the 1990 Outer Critics Circle Awards for Best Off-Broadway Musical and Best Score. The show celebrated its 20th anniversary last year and you can see all the details here.

Don't forget Heartland Theatre Company's last show of its 2010-11 season, Joel Drake John's "The End of the Tour," directed by Sandi Zielinksi, with Nancy Nickerson, Jake Olbert and Cristen Susong heading up an ensemble cast. "The End of the Tour," a story about a dysfunctional family at the end of its rope in Dixon, Illinois, opens April 14 and finishes up May 1. For all the details, visit Heartland's site.

ISU's Westhoff Theatre stays busy with "The Tooth of Crime," Sam Shepard's musical look at a battle between an aging rock star (played by Josh Innerst at ISU) and his younger rival (Matt Bausone) in a dystopic future world where music and violence collide. "The Tooth of Crime" runs from April 20 to 24 with only six performances. For details, click here.

Rounding out the month, Champaign-Urbana's CUTC offers Sondheim's fractured fairytale "Into the Woods," directed by Jeffrey Chandler, on stage at Parkland College Theatre April 21 to 30.

I'll have more about April's events when I get back home, including, of course, a whole lot more about the Humana Festival. Until then, you need to get over to ISU to see "Rock 'n' Roll" and to the Normal Theater to take in "The King's Speech." Do it. Now!
Posted by JulieK at 9:21 AM