"The End of the Tour" Starts Strong at Heartland 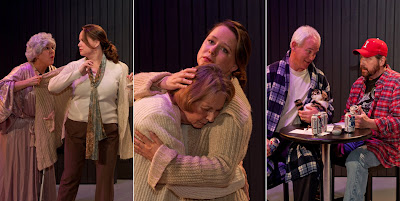 Nancy Nickerson, Cristen Susong, Ann White, Clark Abraham and
George Freeman in Heartland Theatre's "The End of the Tour"
Joel Drake Johnson’s “The End of the Tour” is, at its heart, about family. Not necessarily biological families, but the connections and relationships we build to make us feel safe, even when biology lets us down.

On stage at Heartland Theatre, "The End of the Tour" is at turns darkly funny, explosive and sad, in the way that real families can be. It’s an unflinching look at how the people we love can wound us, whether they mean to or not, and how hard it can be to move past the wounds. Director Sandi Zielinski does an excellent job putting the fun in the extended Morris family’s dysfunction in the early part of the play, when Johnson’s script is at its most humorous, lulling us into a false sense of security about just how messy things are going to get.

What is so good about "The End of the Tour" (and what Zielinski and her cast do such good work with) is the rhythm of the dialogue, the way characters repeat themselves and circle back around to poke the same sore spots. It sounds so natural and so theatrical at the same time, pulling you in and stringing you along until Johnson sets off his explosions and his characters begin to reveal exactly what baggage they’re carrying later in the play.

Zielinski moves her actors in circles, too, sort of winding around each other, close enough to touch if they reached out, but not really even seeing each other even though they’re in intersecting arcs. The staging underlines what’s going on here, with Mae Morris and her children, Jan, the eternal caregiver, and Andrew, her estranged son who never quite escaped, warily circling each other, unwilling to open themselves up to more hurt.

Johnson’s script relies heavily on two-actor scenes, and Zielinski’s cast shows good chemistry and timing in those duos, with Nancy Nickerson and Cristen Susong offering fully-drawn versions of Mae and Jan and the conflict they’ve been chewing on for a good, long time; Jake Olbert and John D. Poling sweet and funny as Andrew and his boyfriend, who doesn’t really understand the deep water he’s swimming in once they get back to Andrew’s hometown of Dixon, Illinois; and Clark Abraham and George Freeman, both heartbreaking and hilarious as Jan’s unhappy husband and his good ol’ boy best friend, dealing with loss and abandonment as best they can. Ann White doesn’t get a whole lot to say as Norma, a silent nursing-home resident who wafts in and out of Mae’s and Jan’s orbit, but she definitely makes an impression.

Julie Mack’s lighting design is also aggressive and intriguing, spotlighting all this family’s foibles, while Judith Rivera’s costume design tells us all we need to know about brassy Mae and who she is. Michael Pullin’s shadowy scenic design provides an excellent backdrop, all murky and sparkly at the same time, not so different from Joel Drake Johnson’s dialogue.

THE END OF THE TOUR
By Joel Drake Johnson

Box office: For reservations, email boxoffice@heartlandtheatre.org or call 309-452-8709. For box office information, click here.
Posted by JulieK at 10:58 AM