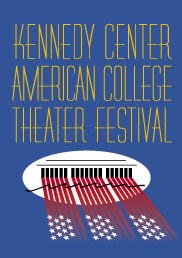 Joyner was previously chosen as one of two actors to advance to the national competition from the Region III Festival, which took place in January. Region III consists of colleges in Illinois, Indiana, Michigan, and Wisconsin.

Joyner's acting partner at the KCACTF National Festival was Zachary Powell, an MFA candidate in acting at ISU. Powell took home the The Kingsley Colton Award for Outstanding Partner, an award sponsored by Actors Equity Association.

You can read more about the Kennedy Center American College Theatre Festival here or visit their blog here.
Posted by JulieK at 11:45 AM