"Amber Rose" and Other Films at the New Art Film Fest 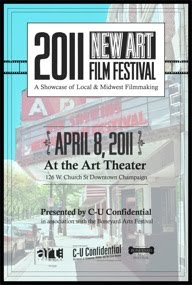 Director Mike Trippiedi has announced that his film, "Amber Rose," fresh off winning the Grand Jury Award for Best Feature Film at the Washington, D.C. Independent Film Festival, will once again play the Art Theater in Champaign.

This time, "Amber Rose" will be part of the New Art Film Festival, an annual program celebrating local filmmakers from Champaign-Urbana and other downstate Illinois cities, presented by the Art Theater and C-U Confidential. The Festival runs for one day only -- Friday, April 8th -- opening at 5 pm and closing at approximately 1 am. And the best part? It's totally and completely free.

The schedule begins at 5 with five short films, and then gears up again at 7 with two very short shorts plus a costume contest before "Press Start 2 Continue," a sequel to the acclaimed videogame comedy "Press Start."

So here's what you need to know... "Amber Rose," 9 pm, The Art Theater in Champaign. Lots of other cool movies by semi-local folks. FREE.
Posted by JulieK at 5:13 PM