Talking with Jake Olbert: Life, Theatre and "The End of the Tour" 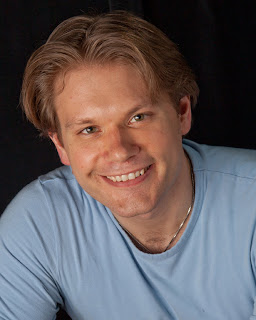 Coming up next on Heartland Theatre's schedule is Joel Drake Johnson's THE END OF THE TOUR, about a dysfunctional family, most of whom live in Dixon, Illinois, perhaps best known as the home town of President Ronald Reagan. In the play, we meet a sharp-tongued mother named May, as well as her two adult children, Andrew and Jan. Andrew left town some time ago, while Jan is yearning to break free right now. This is definitely a family in distress, with something as simple as a hug looming as an impossible hope. And yet there's humor there, too, as everybody negotiates what he or she wants and can manage to accomplish.

To get a better grasp on the play, I had a few questions for Jake Olbert, playing the role of Andrew, the estranged son, and also for Cristen Susong, who plays Andrew's beleaguered sister Jan. They're both terrific actors and, as it happens, fabulous singers. (I've seen them both do both and I can attest to that.) So I wondered how they were approaching THE END OF THE TOUR. You'll have to come back tomorrow to get the rest of the story from Cristen, but today, we're going to hear from Jake.

So, Jake, tell me a little bit about your background. When did you start acting?

I've been acting since fourth grade or so, in school plays and such. I acted all through high school and when it came time to go to college I decided to major in theatre since there wasn't anything else I was really interested in doing. It just seems like something I've always done, so I just keep doing it.

You're done at Illinois State University in a few months, right? What are your post-ISU plans?

Post-ISU I'm heading to Chicago with my girlfriend to try and make it as a working actor. Day-job, auditions, all of that. If it doesn't work out I'm sure I'll find something else to do, but I want to try my hand at it and see where it takes me.

From my perspective, your role in THE END OF THE TOUR is different from what I've seen from you before, even though the things I've seen you do are pretty different from each other, from a Disney prince to a serial killer, a flirty European count and two morally conflicted Shakespearen rulers. What does Andrew have in common with those roles?

Andrew probably has more in common with me myself than a lot of the other roles I've done. I realized that, aside from one of the 10-minute plays a few years ago (also at Heartland!) and a bit part in FLOWERS FOR ALGERNON in high school, I haven't done any modern realism; it's always had a heightened element (like in WOMAN IN MIND or THE UNNATURAL AND ACCIDENTAL WOMEN, the afore-mentioned serial killer role) or it's been realism from a different period (ARSENIC AND OLD LACE, THE IMPORTANCE OF BEING EARNEST). So from that perspective it's challenging to have to dial down what I normally do in a musical or Shakespeare or what-have-you. Andrew is a lot less secure and in control than many of the roles I typically do; I usually end up playing characters who have a fair bit of confidence, a fair bit of power, or both, and Andrew is not terribly confident or powerful in the situation the play puts him in. But, as I said, I have a lot in common with Andrew and so that makes it pretty easy to figure out what he's about.

I find the family in THE END OF THE TOUR pretty realistic and quite fascinating, even though they break my heart a little, and I can sympathize with both Jan and Andrew a lot, even though they've both made mistakes. Do you find him sympathetic?

It's hard not to sympathize with Andrew and Jan, and even when they do treat others poorly in the play we see pretty clearly where that comes from and why they act the way they do.

What do you think THE END OF THE TOUR is really about?

If I had to say what the play was about I would say consequence; it's about damaged people, and where that damage comes from, and what the consequences are in the present for things done in the past. I think if it's teaching us anything it's to be a little more careful in what we do to those we're close to in our lives, because any pain we inflict is multiplied and reflected back and ultimately spread further than we might have intended.

I really like the sound of that. A play about consequence... Thanks so much, Jake.

Be sure to come back tomorrow to see what Cristen Susong, who plays Andrew's sister in the play, has to say!

THE END OF THE TOUR, directed by Sandra Zielinski, a professor specializing in Theatre Education and Directing at Illinois State University, opens at Bloomington-Normal's Heartland Theatre on April 14th, playing through May 1st. To read more about the play or make reservations, visit the Heartland website here.
Posted by JulieK at 3:12 PM