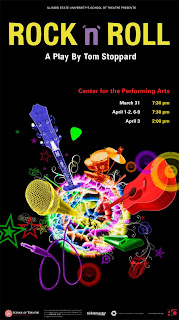 Tom Stoppard is notorious for juggling language, ideas, history, philosophy, science and everything else you can imagine, up to and including physics, gardening, existentialism, intellectualism, revolution, astronauts, journalism, poetry, sexuality, passion, love, Dada, Oscar Wilde and even Cleopatra, into the heady, brilliant mix that is his plays.

"Rock 'n' Roll," his look at the role of rock music as it fuels dissent, change and freedom over three decades in Czechoslovakia and England, is just as intelligent, just as passionate, as any of his plays, even as it feels more personal, coming from a Czech émigré like Stoppard.

In "Rock 'n' Roll," we find Jan, an idealistic grad student at Cambridge, returning to Czechoslovakia with a suitcase full of vinyl LPs in the wake of Soviet tanks rolling into Prague in 1968 to quash the budding reform movement. Jan's mentor at Cambridge has been Max, a professor who is very secure in his belief in Communism and Socialism as a cure for the world's economic ills. Max is married to Eleanor, an acerbic Classics professor fighting breast cancer, and they have a 16-year-old daughter, a free spirited hippie chick called Esmé.

Stoppard rolls with Jan, back in Prague, trying to hold onto his records and his political ideas, and Max, still at Cambridge, as Eleanor's health declines, their daughter marries and has a child of her own, and students, friends and villainous authority figures come and go, arguing ideas and philosophies with Max and pushing Jan around. We end up in 1990, when the Soviet occupation finally comes to a close and the Rolling Stones blow the doors off with a concert in Prague.

Under the direction of grad student James Wagoner, "Rock 'n' Roll" depended heavily on projections and media, filling ISU's Center for the Performing Arts with smoke, music, images and color. Wagoner balanced terrific acting performances with fine technical support, keeping "Rock 'n' Roll" moving smoothly. That's no small feat for a lengthy show with more characters and themes than you can shake a stick (or a billy club) at.

Wagoner's cast members were given the weighty task of a) playing characters who age 20 years over the course of the play, or b) playing more than one character. Most impressive was Brynne Barnard, who fell into the latter category, taking on whip-smart, unflinching Eleanor in the 60s and 70s, and then her very different daughter, fragile, slightly loopy Esmé from 1987 to 1990. Barnard was given the gift of a devastating speech about Eleanor's failing body -- it's really a fabulous piece of writing -- and she did it proud.

Tommy Malouf made Jan, who seems to be the Stoppard stand-in, youthful and appealing, although the unfortunate wigs he was assigned to change up his look over the decades undermined his performance somewhat, while Mitchell Conti did a bang-up job with imperious Max, who is given the short stick when it comes to the arguments he stands for and how history treated his side of the battle.

I also enjoyed Claire Small, fun and flighty as the 60s version of Esmé and then just as eccentric as Esmé's brilliant daughter Alice later on; Anthony Ballweg in three roles, playing a mad Pan figure, a brutal member of the secret police and then a goofy Cambridge student who likes to argue politics; Jeb Burris as Ferdinand, a friend and compatriot of Jan's, and Raquel Medina as Lenka, a Classics student moving in on Max.

Steven P. House's scenic design really ruled the roost, with dramatic red flats slipping up and down on an all-red playing space and some bright silver scaffolding with smoke and strobe lights to herald the arrival of the Stones. The projections from Joe Payne and Marly Wooster were very successful and evocative, making the show feel rock 'n' roll before it even started.

Note: I missed opening night of "Rock 'n' Roll" due to illness, so I ended up attending its last performance on April 9th. This review is based on that performance.
Posted by JulieK at 3:24 PM