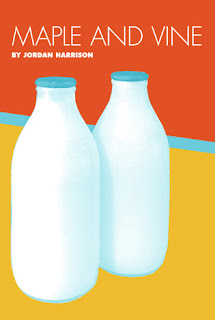 Of all the plays we saw at Actors Theatre of Louisville in this year's Humana Festival of New American Plays, Jordan Harrison's "Maple and Vine" seems to be the one attracting the most attention. Within days of the Humana Festival closing, Chicago's Next Theatre and San Francisco's American Conservatory Theater had already announced they'd added "Maple and Vine" to upcoming seasons.

It's a provocative piece, to be sure, built around the notion that a modern couple might find living in Ozzie & Harriet Land preferable to a world of take-out sushi, Starbuck's and HDTV on their 52" flat screen. Harrison has said he did research into cults, utopian communities and "real groups that have chosen to withdraw from the modern world," according to program notes provided by Actors Theatre Literary Manager Amy Wegener. Wegener quotes Harrison as saying that the impetus for the play came from "upwards of 100 interviews with the Amish, cloistered nuns, Civil War reenactors, and off-the-grid artists living in the wilds of Maine."

One of the most surprising and fascinating ideas Harrison found in the interviews was this one: "Instead of the modern world being too noisy and fast-paced for these people, it was actually too quiet. They were almost frightened by how much freedom they had, and so they traded a measure of that freedom in exchange for more of a social structure, for a community enforcing the rules."

And with that exchange, giving up freedom for community, the characters in "Maple and Vine" feel secure and reassured, to have very specific (as well as racist, sexist and repressive) guidelines to live by. Harrison's play centers on Katha and Ryu -- she works in publishing, while he's a plastic surgeon -- who've lost a baby and are feeling unmoored, dissatisfied, incomplete with their busy New York lives. Katha happens to run into a man who seems completely sure of himself, his perfectly fitted suit and his polished shoes. He tells her about the Society for Dynamic Obsolescence or the SDO, within whose confines he and his Donna Reed wife reside, where everybody pretends it's 1955 forever, and they all live their lives in accordance with rules set down to keep up the pretense as strictly and completely as possible.

Katha thinks this crazy cult may be just what the doctor ordered for her to get over her malaise, while Ryu, who is Japanese-American, is more skeptical. But he loves her, so he goes along, agreeing to try out this retro life for six months. Because of his ethnicity, he's assigned to work in a box factory (I'm surprised they didn't throw a laundry or Chinese restaurant at him) while Katha (now called Kathy for that 50s feel) tries out girdles, pillbox hats and Pigs in a Blanket with ketchup-and-mayo dip.

Harrison does a good job mining the humor and the creepiness of their situation, but I found myself not really believing that Ryu would go along with all of this, giving up his 2011 status as a plastic surgeon as well as his sense of self just because his wife is depressed. He, after all, is the one who has to handle the anti-Japan prejudices built into this post-war society, and it doesn't seem that being good at box-building would really satisfy him. Plus there's a scene where "Kathy" speaks to the all-powerful Authenticity Committee to ask that they act more prejudiced against her husband, and that stuck out like a sore thumb. Why would she do that? What possible purpose could more racism serve? I was also bothered by the issue of medical care for a couple who just lost a baby and are trying to have another child. Would Katha be happy with old-style obstetrical, prenatal and pediatric care? Would her doctor husband?

There's also a kinky subplot involving Dean, the man who runs this place, and his wife, the impossibly put-together Ellen, and the way they get into the drama of repression in a Douglas Sirk/Rock Hudson/"Far From Heaven" sort of way. While intriguing, that angle also seemed a little over the top. Yes, they all get to live in a drama queen soap opera built on furtive glances and illicit trysts, which might be fun for a week or two, but would they really build a community and a whole infrastructure around that?

"Maple and Vine" is very good at raising those questions, anyway, and at making people like me, who do not think going backwards is anything to strive for, quite uncomfortable. Harrison thinks we all say "Oh, I would never do anything like that" as a knee-jerk reaction, but that, if pushed, we might find the faux-Father Knows Best life to be the bees' knees. I don't think so. But audiences should enjoy trying to hash it all out.

In the Humana Festival production, all five actors were spot-on, with especially good work from Jeanine Seralles as Ellen, the tightly-wound perfect 50s housewife. Peter Kim is sympathetic and sweet as Ryu, the husband trying to do his best in an alien world, and Paul Niebanck has the slick Dynamically Obsolete moves down pat as Dean.

And in case you're wondering what my headline has to do with anything, "The Monsters Are Due on Maple Street" is a classic Twilight Zone episode from 1960. I don't have any reason to think that Jordan Harrison was referencing that episode with his play's title, but I have my suspicions. Are Dean and Ellen monsters? Will Katha and Ryu turn on each other like the frightened small-town citizens in "The Monsters Are Due on Maple Street"? I have my suspicions about that, too.
Posted by JulieK at 12:36 PM