Grinding Down "The Tooth of Crime" at ISU 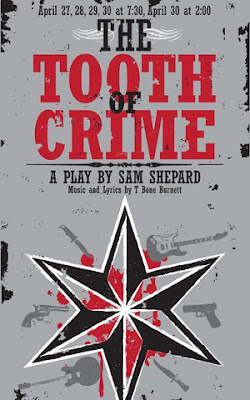 So what exactly is "The Tooth of Crime," and why did Sam Shepard call his play -- which on the surface involves neither teeth nor any major examination of criminals or criminal law -- by that name?

Shepard's play is weirdly poetic, with words that are either made up to sound like the pop-culture slang of some cowboys-and-rock-stars Futureworld or stretched beyond recognition. Everybody is sussing here and choogin' there, throwing barrages of Markers, Keepers, Matars, vectors, bits and choppers, down booga, throwdowns and slowdowns. Yabadaba Honk Man. Chingaflack!

You can call it gibberish, nonsense, or (as my husband put it) Madlibs, but there is poetry here. The question is whether you can get beyond the distancing effect of all that crazy talk to hear the poetry or find a story in "The Tooth of Crime."

The characters -- including Hoss, an aging rock star involved in The Game, wherein players kill each other off, or perhaps just amass points, under an elaborate system of rules and regulations, some of Hoss's hangers-on and enablers, and a Johnny Come Lately/New Kid in Town named Crow who aims to take Hoss down -- are definitely intriguing. And Shepard's main plot thread, the battle between the old king and a contender for his throne, is one that has carried drama since the dawn of man.

But then there are those words... It's not just that most of them don't make any sense in the order and velocity in which they're delivered. My main problem with the script is that it doesn't go anywhere for most of its two-and-a-half-hour playing time. Hoss angsts about being over the hill, various advisers tell him End Times are coming, he angsts some more, the New Kid arrives, they battle, not with guitars or swords or even that nifty combo guitar and crossbow we got a glimpse of, but with... Words. Cowboy words, bluesman words, proto-faux-cryptic-Shaman-Matrix words... It's kind of disappointing.

The mix of Old West mythology with a little dystopic fantasy and some rock 'n' roll is cool enough, and T Bone Burnett's music, added to the play in 1996 (along with a "Second Dance" subtitle) is moody and compelling, making a positive impact on the material. Even so, "The Tooth of Crime" is just too pretentious, too muddled, too full of its itself to work for me. Yes, the world has gotten complicated and old, yes, pop culture lingo is idiotic, and yes, rock 'n' roll has sold out. And fame is fleeting and there's always a newcomer nipping at the heels of even the biggest star.

But why this vehicle? Why are the songs where they are? Why is the climactic battle with words instead of rock 'n' roll? What throne are they fighting for? How could Hoss and the seven people on his side not be able to smack down one small interloper? Is it all a metaphor for something else? Or just an empty exercise?

Director Brandon Ray gives "The Tooth of Crime" a good go in ISU's Westhoff Theatre, with excellent commitment from his cast, especially when it comes to the physical side of the action, and sharp technical support. Eric Moslow's set design looks like the dungeon of a castle, which seems appropriate, but it comes with microphones and video, too, to showcase the musical side of this "Tooth." The work of Movement Choreographer Gaby Labotka, Fight Director Tony Pellegrino and Media Designer Matthew Harter adds dark energy and style.

Among the cast, Josh Innerst commands attention from the get-go as Hoss, the rock 'n' roll warrior nearing the end of the road. Innerst puts his voice and body on the line, although he's more handsome and healthy than you might expect from the latter-day Mick Jagger/Keith Richards/Iggy Pop mess of a man Hoss must surely be by this point in his career. As Crow, Matt Bausone similarly goes hard and strong when it comes to the choreography, and he definitely looks young enough to be the upstart kid in the proceedings, but he's fighting in shaggy manpris and flip-flops, with hand-made snake symbols marked on his torso and face. He's believable as a punky adolescent who might try to steal cigarettes from the Mini-Mart, but not as a deathly, other-worldly Crow.

Innerst and Bausone both sing, as do Michael Parrish, as somebody named Chaser who hangs out in Hoss's circle, and Jenna Liddle, playing grungy groupie girl Becky. They're all good singers, but they also sound too sweet and pretty for this set of people. There's no whiskey or gravel, no years of being "rode hard and put away wet" in this crowd. Liddle wears stiletto boots and a mini-dress with jangly, jingly metal on the front; she looks far more dangerous than Crow and makes you wonder why she didn't stab him with her boot or slash him with a piece of her dress and stop the plot cold.

The singers are backed by a group called the Hygienists, who arranged Burnett's music for the ISU production. They sound great, too, but I couldn't help wondering whether they were supposed to be Hoss's band, which would presume sort sort of camaraderie, or just some guys who waft in and out of the dungeon and handily provide music when the other characters want to sing. I'm coming down on the side of guys who waft in and out.

All in all, I'm not sure what to make of "The Tooth of Crime." It's tough material, to be sure, and a lot to ask of college actors and designers. It's also a lot to ask of audiences.