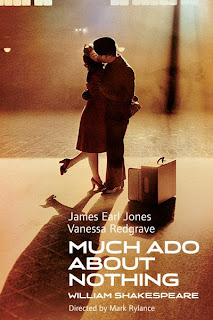 Joss Whedon's black-and-white home-grown Much Ado About Nothing has been the story of the summer, exciting Whedon fans and bringing a few new folks to Shakespeare's most romantic comedy. But last December, a very different Much Ado was announced, offering the prospect that Beatrice and Benedick, usually envisioned as a pair of mature lovers, would be very mature indeed. In this production for London's Old Vic, Beatrice and Benedick will be Vanessa Redgrave, 76, and James Earl Jones, 82.

The age of this B & B has created some controversy, with The Guardian's Lyn Gardner deciding it was, after all, much ado about nothing, and age simply doesn't matter on stage, while the Evening Standard quoted director Mark Rylance as saying that this take on Beatrice and Benedick was right for the script, which involves "the callousness of youth and the wisdom of age."

Rylance himself has played Benedick -- when he was in his early 30s -- and Doctor Who's David Tennant and Catherine Tate took on the battling lovers in 2011, when both were in their 40s. You can see the Tennant/Tate Much Ado as preserved by Digital Theatre if you want to compare/contrast to Acker and Denisof. Or, of course, you can pop in the DVD from the 1993 movie directed by and starring Kenneth Branagh, who played Benedick opposite his then-wife Emma Thompson in a sweeping, lyrical and lovely film set in Tuscany.

If you have a way to get to London between September 7 and November 23, you can try to get a ticket to this new Much Ado at the Old Vic. Based on the poster art shown above, I'm guessing that Rylance's production will set up Beatrice and Benedick's first love affair, the one that didn't end well and contributes to the tension (and the sparks) between them now, as having occurred during World War II. That would also suggest (given Redgrave and Jones' current ages) that when they meet up again, they haven't seen each for quite some time. Maybe 50 years or so. That's a big gap to hold a grudge. And since Jones is American while Redgrave is British, perhaps the back story will be that he was an American GI who simply never returned to his English girlfriend after the war. Of course, shoehorning that interpretation into Shakespeare's existing words which set the action in Messina, Italy, when Benedick (among others) celebrates after a successful battle, might be a bit tough. Surely an 80-year-old Benedick ought to be higher up the ranks by now and not out engaging in combat alongside Spanish princes. Or maybe the poster indicates it is World War II now, when the action commences, and that's an image of Hero and Claudio, the younger lovers in the piece, as they appear right this minute, as opposed to a picture of B & B in the past. It's fun to speculate, but we'll find out for sure what conceit Rylance has constructed when the show opens in September.

Redgrave and Jones have been paired for this project after performing Alfred Uhry's Driving Miss Daisy on Broadway and in London in 2010-11, a production that showed off their chemistry as well as their stage chops. If anyone can make a senior citizen Much Ado work, it's those two.

For this Old Vic production, Beth Cooke will play Hero, the sweet young thing whose honor is besmirched by evil Don John, while Lloyd Everitt will be her Claudio. James Garnon has been cast as Don Pedro, the Spanish prince mentioned above, with Danny Lee Wynter as Don John, his half-brother and the villain in the piece, and Michael Elwyn as Leonato, Hero's dad and the host to the extended party at the center of the action.

American actor Kevin Spacey has been the artistic director of the Old Vic since 2004, and he has announced he will stay in that position until 2015. Speculation continues that he will be succeeded by none other than Kenneth Branagh, the famous film Benedick, who recently played Macbeth at the Manchester International Festival opposite Alex Kingston.
Posted by JulieK at 12:43 PM