Who'll Be DANCING AT LUGHNASA for ISU

Fresh off her off-Broadway triumph with Deanna Jent's Falling, director Lori Adams returns to the Illinois State University Center for the Performing Arts at the helm of the lovely and lyrical Dancing at Lughnasa. This memory play, written by Brian Friel,  is set in his native Ireland, and its original production took place at the famed Abbey Theatre in Dublin in 1990.

Friel is sometimes called the Irish Chekhov, and Dancing at Lughnasa bears that out in some respects. Instead of Chekhov's Three Sisters, Friel focuses on five sisters, the Mundys, who live together in a small cottage outside the fictional town of Ballybeg in County Donegal. We see Kate, Maggie, Agnes, Rose and Christina Mundy from the point of view of Michael, Christina's son, as he shares his memories of his mother and her sisters in August, 1936. Their lives are complicated not just by the murky romantic possibilities of that moment in their lives, but also by their difficult financial situation, and the return of their brother -- much changed and very unwell -- after 25 years of mission work as a priest in Uganda. 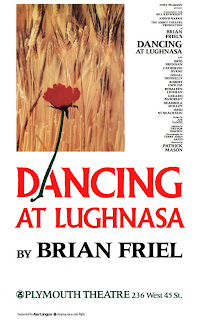 Dancing at Lughnasa is poignant, sweet and sad, as we learn about the sisters' dreams and disappointments, and how Friel's stand-in, Michael, was affected by it all. The play has been honored with numerous awards, including the 1991 Olivier Award in London and the 1992 Tony Award for Best Play for its Broadway production. You can see the Broadway poster at right.

The 1998 film version, featuring Meryl Streep as oldest sister Kate, also made an impression, winning an Irish Film and Television Award for Brid Brennan, who played Agnes. Brennan had previously won the Tony for the same role in the Broadway production.

Lori Adams has cast MFA actor Robert Johnson as Michael, our narrator who steps back into his youth, with fellow graduate actors Faith Servant and Natalie Blackman as Agnes and Rose, and Ronald Roman as Gerry, Michael's father and the man who rides back into Christina's life with a flourish. Fiona Stephens and Jaimie Taylor will play Kate and Maggie, the taskmaster and the joker in the family, respectively, while Elsa Torner will take on Christina, Michael's mother.

Performances of Dancing at Lughnasa are scheduled for November 1 to 9 at the ISU Center for the Performing Arts. You can click that link under the title to see the Department of Theatre and Dance's entire 2013-14 slate of productions as well as ticket information.
Posted by JulieK at 1:28 PM