And the new Doctor Who is... 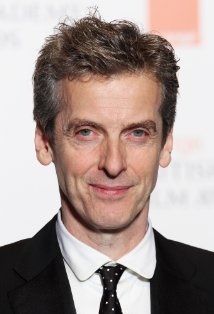 He was the odds-on favorite among British bookies (such a favorite that bets were suspended on him), so it shouldn't come as any surprise, except perhaps to American Doctor Who fans who have no idea who Peter Capaldi is.

While speculation has run rampant about who might be the 12th Doctor, with some people positing that it might be a woman or a person of color or even (gasp) an American, when it came time for producer Steven Moffat to make a choice, he picked... Another white guy. This one is Scottish, as was David Tennant, the 10th Doctor, who is my personal favorite Who.

The series about the traveling Time Lord who bops around the universe in a blue telephone booth called the Tardis has been around since 1963, with each Doctor replacing the last in a process called Regeneration. In general (or regeneral), the Doctors have been trending younger since William Hartnell originated the role at 55. After that, 46-year-old Patrick Troughton took the role, followed by 50-year-old Jon Pertwee, 40-year-old Tom Baker, Peter Davison, whose first episode aired a month before he turned 30, 39-year-old Colin Baker, 43-year-old Sylvester McCoy, 36-year-old Paul McGann, 41-year-old Christopher Eccleston, 34-year-old David Tennant, and then the youngest of all, 27-year-old Matt Smith.

Capaldi goes back to the 50s. Born in 1958, he is now 55, making him the oldest Doctor since William Hartnell. Interesting, yes?

In Britain, Capaldi is best known for his role as a foul-mouthed spin doctor in the political comedy The Thick of It, which aired from 2005 till 2012. Way back in 1983, Capaldi appeared in one of my favorite movies, Bill Forsyth's Local Hero, which featured Burt Lancaster as an oil magnate who sent Peter Reigert to Scotland looking for a place to drill, but instead finding magic and maybe even a mermaid. If you want to get a sneak peek at Capaldi, Local Hero isn't at all a bad way to go.

And then, of course, you'll be able to see what he brings to the Doctor Who table when the new season begins next year.
Posted by JulieK at 2:39 PM