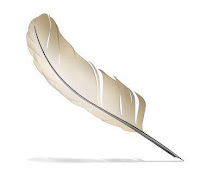 When it comes to writers' conferences and residencies, the New Harmony Project is a little different. Founded in 1986 to create an alternative to film, stage and TV scripts that sensationalize or exploit, New Harmony now brings writers together with directors, dramaturgs and actors, looking to develop and support "new works for stage, television and film that sensitively and truthfully explore the positive aspects of life."

That's their mission, and they're doing their best to stick to it. They explain, "Our participants gather each spring to create a nurturing environment for writers -- a setting free of the restrictive pressures of the professional world. In this community, every artist becomes a resource to the process of the writer. Through an intensive series of readings and rehearsals, we afford each writer the rare opportunity of having the freedom to explore ideas without the fear of failure." In fact, they bill themselves as the place "where writers' spirits soar."

The New Harmony Project is accepting submissions right now, with an October 1 deadline for any uplifting, empowering play, musical, screenplay or teleplay that has not yet been produced. Those scripts will be considered for a spot at the Spring 2014 conference in New Harmony, Indiana. And what happens then?

"At the conference, the words on the page are given life through daily script-in-hand rehearsals. Over a 14-day period, up to six works and their writers experience full development with their team of collaborators who provide as much input as necessary for the individual writer's process. The writers are supplied with the valuable opportunity of revising based not only on their own reactions to the rehearsals, but also on the constructive and nurturing feedback from their development teams. At the end of the two weeks, each script shares a final reading in front of a community of participants and supporters. In addition to these full development projects, as many as seven writers-in-residence are invited to work on projects of their own choosing and serve as an available resource to other writers at the conference. These writers are typically individuals whose body of work has garnered praise and recognition."

It's pretty much a dream scenario for any playwright with a work he or she would like to see developed. Past projects include scripts by Rebecca Gilman, Idris Goodwin, Theresa Rebeck, Robert Schenkkan, Ken Weitzman, Constance Congdon, Dan O'Brien, Y York, Jim Leonard, Warren Leight, Daisy Foote, Regina Taylor, Susan Zeder, Carlyle Brown, Tammy Ryan and Jeffrey Sweet, which gives you some idea of the breadth and depth of the New Harmony Project.

The 2013 Company is shown below, in case you'd like to look for a friend or colleague. 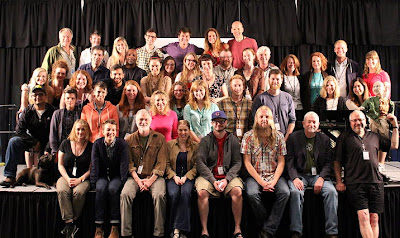 And remember, your submission is due October 1 for next year's New Harmony conference.