Urbana's Station Theatre has announced the selection of plays which will make up its upcoming 42nd season. As usual, the Celebration Company will mix old and new, musical and straight plays, provocative and experimental and tried and true. 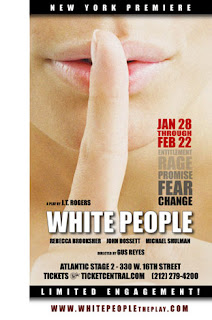 Opening the Station's fall season will be J.T. Rogers' explosive White People, a "candid, brutally honest meditation on race and language in our culture." A play that has been well-produced all over the country, including a 2009 Off-Broadway production, White People features three characters, three decidedly white people, who reveal their feelings about race straight up. It will be directed by Joel Higgins, with performances from October 3 to 19, 2013. You can see J.T. Rogers talk about the play along with a few brief excerpts here.

That will be followed by William Inge's 1950 classic Come Back Little Sheba, directed by Tom Mitchell from the University of Illinois Department of Theatre. Come Back Little Sheba goes inside an unhappy middle-class household that gets even more unhappy when Doc, a chiropractor, and Lola, his blowsy wife, take in a pretty young boarder. Shirley Booth played the role of Lola on Broadway and in the 1952 movie, earning a Tony and an Oscar for her efforts. Her Broadway Doc, Sidney Blackmer, also won a Tony Award, but Burt Lancaster, the film version of Doc, went away empty-handed. The play was revived on Broadway in 2008, with Law & Order's S. Epatha Merkeson as Lola, Kevin Anderson as Doc, and Zoe Kazan as Marie, the young woman who upsets the fragile balance in their lives. At the Station, Come Back Little Sheba will run from November 7 to 23.

The musical Chess, with music by the male half of ABBA, Benny Andersson and Björn Ulvaeus, and lyrics by Tim Rice, is up next, scheduled for performances December 5 to 21. The story goes that Rice wanted to fashion a musical around the Cold War, and he chose the game of chess to frame the action after all the brouhaha surrounding Bobby Fischer and Boris Spassky's World Chess Championship in 1972. Chess the musical, complete with hit pop song, "One Night in Bangkok," began as a concept album, followed by a production in London's West End in 1986. To get the show to Broadway, a book by Richard Nelson was added, but the show still didn't take off in New York, with the Imperial Theatre version only running for 68 performances. Still, Chess has kept its fan following over the years, as musical aficionados hope to find a production of this elusive and slippery show somewhere. The Actors Fund put together a special one-night performance in 2003, with an all-star cast that included Josh Groban, Sutton Foster, Norm Lewis, Adam Pascal and Raul Esparza. Mikel Matthews, Jr. will direct for the Station.

Roberto Aguirre-Sacasa's prep-school drama Good Boys and True will open the Station's new year, with performance beginning January 23, 2014, directed by Thomas Schnarre. Good Boys and True premiered at Chicago's Steppenwolf Theatre as part of its 2007-08 season that examined "what it means to be American." Aguirre-Sacasa's story involves Brandon Hardy, a golden boy at exclusive St. Joseph's prep school, and what happens to threaten his life of privilege when a video that purports to show him doing something very, very bad emerges. You'll get a better picture of  the play from Steppenwolf Artistic Director Martha Lavey's intriguing notes on the play written during its production there.

Sarah Ruhl's quirky and surreal The Clean House, directed by Katie Baldwin Prosise, takes the stage next. Ruhl has become one of the freshest voices in 21st century American theatre, and The Clean House pretty much defies description. Its characters include Matilde, a young Brazilian woman who has a job as a cleaning lady but really sees herself as a stand-up comedian; Lane, her employer, who has noticed the house isn't very clean and wonders if her housekeeper is depressed; Lane's sister, Virginia, who is a compulsive-obsessive cleaner and tries to make a deal with Matilde to clean Lane's house on the sly; Charles, Lane's husband, who is cheating on her with a much older woman; and Ana, the breast cancer patient/older woman Charles is in love with. Add some apples dropped from one reality into another, the funniest joke in the world, the Jewish concept of "besheret," something like a soul mate, and a trip to Alaska to cut down a yew tree, and you have some concept of The Clean House, which was a finalist for the Pulitzer Prize and won Ruhl the Susan Smith Blackburn Prize for playwriting. Look for The Clean House on stage at the Station from February 20 to March 8. 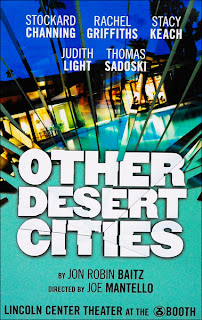 The March 27 to April 12 slot is still open, with details to be announced at some future date, but the final show of the 2013-14 season will be Jon Robin Baitz's Other Desert Cities, directed by Kat Bohannon Holley, with performances scheduled for April 24 to May 10, 2014. Baitz's play, "a taut, witty drama about an affluent California couple whose daughter has written a memoir that threatens to reveal family secrets about her dead brother," was also a Pulitzer Prize finalist, and its Broadway production won a Tony Award for Judith Light as Best Actress in a Featured Role. The Broadway cast also included Stockard Channing and Stacy Keach as the Wyeth parents, and Rachel Griffiths as their tell-all daughter.

If you're looking for more information, you can scan the specifics -- and check back to see what fills that March/April slot -- at the Station Theatre website.
Posted by JulieK at 1:47 PM