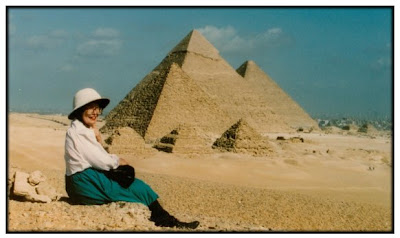 Barbara Mertz was one of a kind and, as it happens, one of my favorite authors. And she passed away yesterday at the age of 85. Her website posted this notice today: "Barbara Mertz (aka Elizabeth Peters & Barbara Michaels) died peacefully at home early in the morning of Aug. 8, 2013. She had put up a very tough battle against cancer for over a decade, in a style worthy of Amelia. She preferred not to be fussed over, and so did not make her illness public. She died as she had told everyone she wanted to – unexpectedly, in her sleep. Shortly before her death, she had written a line to be posted on this webpage: "At 85, Elizabeth Peters (aka Barbara Michaels) is enjoying her cats, her garden, lots of chocolate, and not nearly enough gin."

I used to have a habit of running the table with authors I liked. After reading and loving one book, I would go to the library to check out each and every book by that person, frequently driving myself and the librarians crazy trying to track down obscure titles. With Barbara Mertz, the mystery and romantic suspense author who wrote as Elizabeth Peters and Barbara Michaels, I quickly discovered that trying to read all of her books was going to be a tricky proposition. She wrote a lot of them. But the sense of humor, the intelligence and the cynical, snarky use of romance was perfect for my taste, and I persevered in trying to track down every single one.

Over the years, as her books were reprinted with different covers, that meant I might reread something I recognized from years ago and get cranky with myself for not realizing that, no, Devil May Care was not a new book, and yes, I had read it a long time ago and simply forgotten.

On the other hand, her Vicky Bliss books, featuring a fresh and funny art historian who had a thing for a bad boy/thief who popped up every once in awhile, stayed in my mind just fine, and I reread those on purpose because I enjoyed them so much. Borrower of the Night, whose title is taken from Shakespeare's Macbeth, was the first Vicky Bliss book, but it's in the second, Street of the Five Moons, that Vicky meets the divine (and devilish) John Smythe, of whom she decides, "He hath no drowning mark upon him; his complexion is perfect gallows," a quotation from The Tempest. It was that style, with a little Shakespeare or John Donne or even Charlemagne folded into her clever mysteries, that made her so perfect for me.

I discovered Mertz's Jacqueline Kirby series at a time when I was myself writing romance novels, so their send-up of that world was again perfect for me, for who I was and where I was in my life. As Mertz wrote her, Kirby was a librarian with a huge purse full of hairpins and miscellany who decided to try writing romance, which took her to a romance writers' conference and then into attempting to write a sequel for a famous historical novel. Die for Love and Naked Once More were absolutely hilarious as well as biting. And wonderful. The Malice Domestic voters agreed with me on Naked Once More, which won an Agatha Award as the Best Mystery Novel of 1989.

I didn't necessarily read the books in order, but instead whenever I found them at the library or the bookstore, or, after the advent of online booksellers, when browsing online and stumbling over something that looked new. But a third Jacqueline Kirby book, The Murders of Richard III, fell into my hands early on, just after I'd read Josephine Tey's The Daughter of Time and I was interested in all things Ricardian. Mertz (writing as Elizabeth Peters for her Vicky Bliss, Jacqueline Kirky and Amelia Peabody books) had a very different tone and a very different take than Tey did, sending up the Richard III Society and its earnest rewriting of Shakespearean history as she sent Kirby to a weekend in the country that turned murderous when someone started offing guests in exactly the way Shakespeare's Richard killed people in the play. Watch out for that vat of malmsey!

It was a delightful book whichever side of the Richard III controversy you come down on, mostly because Jacqueline, like Vicky and Amelia Peabody, the Victorian Egyptologist who became Mertz's most popular sleuth, were such delightful heroines. Mertz herself was born in Canton, Illinois, in 1927. She attended the University of Chicago and studied Egyptology, famously earning a PhD by the time she was 23. The story goes that it was hard for a woman at that time to get any traction as a professional in her field, so she turned to writing, first putting out two non-fiction books about Egypt under her own name, and then working under the Barbara Michaels pseudonym, spinning scary, romantic tales with Gothic overtones and things that went bump in the night. She continued with Barbara Michaels even as the Elizabeth Peters side of things began to take off, with some very good books as late as 1999, with Shattered Silk, another of my favorites, in 1995.

With someone like Barbara Mertz, you hope she has one more Vicky Bliss or Jacqueline Kirby in her, no matter when she did the last one. But her legacy of almost 70 mysteries and suspense novels remains. Anyone want to join me in pulling out Borrower of the Night and racing through the Vicky Bliss books one more time?