Switching on SEND THE LIGHT for ISU 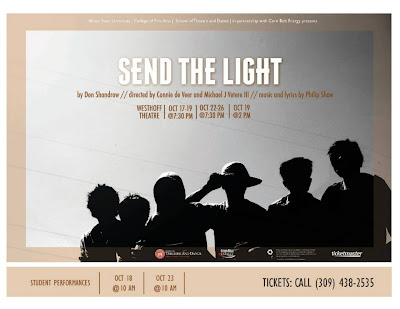 Just about two years ago, I wrote a piece on Send the Light, an original musical from Don Shandrow (book) and Phil Shaw (music and lyrics) that tells the story of how electrical cooperatives brought power to farms and small towns. At that time, Send the Light was produced as a "One Shot Deal" under the auspices of Shandrow's New Route Theatre.

Send the Light started back in 2007, with a production that played at the McLean County Museum of History as well as in front of electric cooperative associations in Illinois and Missouri. Half of the four-person cast from 2007, including local actors Rhys Lovell and Irene Taylor, returned for the 2011 one-night performance.

Now Shandrow and Shaw are bringing a new version of Send the Light -- with a much expanded cast -- to Westhoff Theatre at Illinois State University, for performances from October 17 to 26. ISU faculty members Connie de Veer and Michael Vetere III are co-directing, with a cast that blends community members and students in a (get ready for it) cooperative venture!

Send the Light is a community outreach project with Cornbelt Energy. For all the details, click here to see the play's Facebook event page.
Posted by JulieK at 2:36 PM