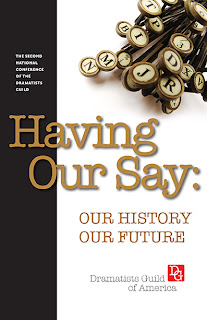 The Dramatists Guild has been having its annual conference in Chicago this week, with all kinds of nifty panels and discussions devoted to the business and creative aspects of playwriting, composing, and creating librettos and lyrics. On Thursday, Douglas Post, the playwright behind Heartland Theatre's next production, Earth and Sky, introduced keynote speaker Martha Lavey, Steppenwolf's Artistic Director, and that was followed by sessions with notable people like Lin-Manuel Miranda, Theresa Rebeck and Jeffrey Sweet.

One of the most interesting panels involved adaptation and/or translation, or working with someone else's material from another medium or language to create something for the stage. The panelists were Carol Hall, composer and lyricist for The Best Little Whorehouse in Texas and lyricist for A Christmas Memory, a musical adaptation of a Truman Capote story; Winnie Holzman, who adapted Gregory Maguire's novel into the megamusical Wicked; David Ives, the playwright behind All in the Timing as well recent adaptations like The Liar, The School for Lies and Is He Dead? and the book doctor (surgeon?) for 33 different Encores! musicals; and Doug Wright, who wrote the play I Am My Own Wife and the books for musicals as disparate as Grey Gardens, The Little Mermaid and Hands on a Hardbody. That's quite a panel!

Luckily for those of us not in attendance at the Dramatists Guild conference, Broadway World is sharing the wealth by offering video of that panel that anyone can look at. Click here to see and hear the wit and wisdom of Hall, Holzman, Ives and Wright. It's jam-packed with good information (like the fact that it's better to adapt the work of someone who is dead, and maybe easier if you don't like the source material all that much) as well as a glimpse into the personalities of some different people who've all managed to make adaptations work.

And if, like me, you are now bound and determined to get to next year's conference, you can see information on joining the Dramatists Guild here.
Posted by JulieK at 1:49 PM