A Movie for Thanksgiving? Try MIRACLE ON 34TH STREET 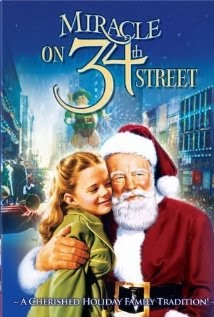 If you are eschewing Black Friday shopping on Thursday, if Charlie Brown Thanksgiving or NFL football isn't how you want to spend your Thanksgiving evening, you may find getting out to the Normal Theater a better option.

We all think of Miracle on 34th Street as a Christmas movie, given the whole "Is he the real Santa?" plot. But it begins with the Macy's Thanksgiving Day Parade, making it appropriate for Turkey Day, too.

I chose Miracle on 34th Street as one of my favorite holiday movies back in 2010. Here's what I said about it then:

"Miracle on 34th Street (the 1947 version) is one of the most recognizable holiday movies around, so everybody should know its story about a cynical little girl named Susan (played by the unbelievably cute Natalie Wood) and her hard-working single mother (Maureen O'Hara), neither of whom believes in Santa Claus. But then what appears to be the real Kris Kringle (played by the even more adorable Edmund Gwenn) arrives at Mom's department store and a firestorm of controversy erupts. Is he crazy? Is he the real deal?

"A handsome lawyer (John Payne) lends a hand when Kris has a sanity hearing, Mom gets a romance, Susan starts to believe that wishes can come true, and everybody has a Merry Christmas. Well, maybe not the cranky pencil pusher who put Santa Claus on trial.

"It's a classic for a reason: All the elements work perfectly, the players are terrific and just what they need to be, and both Edmund Gwenn and Natalie Wood knock it out of the park."

The Normal Theater will be showing Miracle on 34th Street at 7 pm on Thursday and Friday, November 28 and 29. All tickets are $7.
Posted by JulieK at 1:00 PM