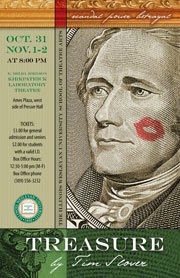 Tim Slover's Treasure, in performance through Saturday at Illinois Wesleyan University's E. Melba Kirkpatrick Laboratory Theatre, illustrates exactly why history matters. It may seem like dusty data from crumbling pages, but the issues, the choices, the drama is oh-so-very current as it unfolds.

Treasure is all about Alexander Hamilton, a familiar name from the early days of the United States of America, from the time when a new nation was finding its way and forging a path for its future. Who would decide what America would be? Would it be Federalists like Hamilton who wanted a strong central government based on a national bank and national debt, strong manufacturing and tariffs? Or Jeffersonians, who wanted power to remain in the South with its rural and plantation-based economy? In the play, Hamilton tells us that his primary concern is money, as the first Secretary of the Treasury in American history, as well as someone who himself came from nothing but traded on his intelligence and insight to carve out a position at the top of the heap in American politics.

Hamilton wants opportunity for everyone through manufacturing, so that hard work and brain power will mean more than family name or inherited wealth.

North vs. South, Industrialists vs. Landowners, Bootstraps vs. Inheritance, National power vs. State's Rights, the 1% vs. the 99%... It couldn't be more current, could it? And while the arguments about who is right and who is wrong to lead America may form the crux of the debate, what turns everything upside-down is not political ideals, but personal weakness. Like so many other politicians, Hamilton thought his personal life -- and marital infidelity -- couldn't touch his political reputation. And he was very, very wrong.

Treasure works as a piece of dramatic literature because Slover was careful to build the tension and to weave the larger issues into Hamilton's personal story. Director Michael Cotey gives his young cast -- three sophomores, a junior and two seniors in Illinois Wesleyan's School of Theatre Arts -- the tools to home in on the story, to communicate the complicated theories of wealth and governance by focusing on the characters and their conflict instead. Treasure is staged in the round inside the Kirkpatrick Lab Theatre, a tricky proposition in any space, but here it serves to keep the action right in front of you.

Zachery Wagner has the profile for Hamilton, a handsome man as you can tell from your ten-dollar bills, and he also does well with the hard intelligence that bound Hamilton to his principles even as it blinded him to his own failings. He is well-matched by Elizabeth Albers as Betsy Hamilton, his loyal wife, who has spirit and a mind of her own. When push comes to shove and tempers fly inside the Hamilton marriage, Wagner and Albers do their best work.

On the political side of the equation, Elliott Plowman is an audience favorite as Frederick Muhlenberg, the Lutheran pastor who was the first Speaker of the House of Representatives and someone who found himself on both sides of the Congressional conflict, here offered for comic relief,  and Steven Czajkowski is a little scary as future president James Monroe, the villain of the piece, who is willing to lie, cheat and manipulate muckrakers to get what he wants, which is keeping all the nation's wealth in the hands of a privileged few.

The other villains are more low-rent, with Nick Giambrone as a thug named James Reynolds who isn't afraid to get his hands dirty, and Anna Sciaccotta as his wife, Maria, who looks sweet and pitiful, but plays both sides of the game extremely well. Playing the bait in a blackmail trap, Sciaccotta negotiates the turns in Maria's motives nicely.

Sydney Achler's scenic design is simple -- a rug or two, a desk, a chair -- but effective, and Laura Gisondi's lighting design enhances the mood and shifts scenes appropriately.

I hope today's students who know nothing of Colonial America, who think the 21st Century Tea Party and state's rights demagogues either sprang up out of nowhere or reflect the beliefs of our Founding Fathers, will pay attention to what's really happening underneath the sex scandal in Treasure, where ambition, greed, carelessness, righteousness, honor, betrayal and potential (the words in Cotey's director's note) and a fight for America's future lie.

Running time: 2 hours and 20 minutes including one 15-minute intermission

Remaining performances: November 1 and 2 at 8 pm