Community Players is the first local theater out of the box with plans for their 2014-15 season. As usual, Players will combine American classic stage plays with big, boffo Broadway musicals to create their season. 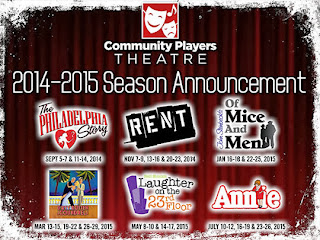 The Philadelphia Story, the Philip Barry comedy about the privileged classes enjoying their privileges, created a comeback on stage and on film for Katharine Hepburn, who played Philadelphia socialite Tracy Lord. Tracy is set to marry "man of the people" George Kittredge, but temptation in the form of newsman Macauley Connor and her ex, C. K. Dexter Haven, looms large as the wedding nears. Community Players will present The Philadelphia Story as their September 2014 show, with performances September 4-7 and 11-14.

Next up will be Rent, the Broadway musical that transfers La Bohème to Alphabet City in Manhattan in the late 80s. Rent composer Jonathan Larson passed away unexpectedly at the age of 35 just before the show's first off-Broadway preview, but his creation lived on in the hearts of countless fans. This story of young artists trying to live the Bohemian life in the wake of AIDS, drugs and landlords ended up with three Tony Awards and a Pulitzer Prize. Rent will open November 6, with performances continuing through the 23rd.

After that, it's back to the American classics. Of Mice and Men, the John Steinbeck drama from 1937, is scheduled for January 15 to 25, 2015. Steinbeck focused on migrant workers Lennie and George, two sad souls looking for a place in the world during the Great Depression. Broderick Crawford and Wallace Ford were the first stage Lennie and George, while Lon Chaney, Jr. and Burgess Meredith were unforgettable in the 1939 film and Steppenwolf Theater's John Malkovich and Gary Sinise brought Of Mice and Men and these two wounded characters back on stage and on film.

Dirty Rotten Scoundrels, a Broadway musical based on a non-musical film, comes to community Players from March 12 to 29, 2015. With music and lyrics by David Yazbeck and a book by Jeffrey Lane, Dirty Rotten Scoundrels tells the tale of two con men plying their trade fleecing rich women on the French Riviera. Freddy and Lawrence are competitors turned partners, but a beautiful mark may just turn the tables on them. Marlon Brando and David Niven were the first actors to play the roles in 1964's Bedtime Story, but Steve Martin and Michael Caine were the ones who started the Dirty Rotten Scoundrels tradition. On Broadway, with musical additions, it was Norbert Leo Butz and John Lithgow.

A less familiar Neil Simon play, Laughter on the 23rd Floor, is up in May. It's autobiographical, which you might expect from Simon, but about the part of his life when he worked as a comedy writer for Sid Caesar on Your Show of Shows in the 1950s. Caesar and his Show are translated into Max Prince and a weekly comedy show bearing his name, with other real comedy writers like Mel Brooks and Larry Gelbart showing up loosely disguised on the cast list. Expect Laughter on the 23rd Floor in performance from May 7 to 17.

Finishing up the season is Annie, that barnburner of a musical about a red-headed orphan that opened on Broadway in 1977 and didn't close till 1983. A new, updated version of Annie is filming in New York right now with Quvenzhané Wallis as the title girl, so there should be plenty of buzz for the original by the time it hits the stage at Community Players in July. There are lots of roles for kids in this one, too, which makes it different from Rent and Dirty Rotten Scoundrels, which have much more mature themes.

And that is what Community Players is showing for the latter part of 2014 and the first half of 2015. It's a little early to plan ahead, but Rentheads may be doing just that for their beloved show. Players is offering all the details here.
Posted by JulieK at 2:17 PM