Look Out! November Crashes into Theaters with Every Possible Option

Time to binge on the last of the Halloween candy and toss the pumpkins away. November is here!

Although it's easy to get fussy about November as the days get shorter and the weather takes on a certain chill, there's also a lot to keep you occupied and away from sad songs like "November Rain," "November Blue," and the one where November has tied Tom Waits to an old dead tree. Take a deep breath, put away the November songs, and jump into...Thanksgiving! Pie! Lots and lots of pie!

As well as dancing Irish sisters, David Sedaris, a crazy acting class at Heartland, Monty Python at Community Players, Angels descending from on high, and Noel Coward at IWU...

And founding father Alexander Hamilton, he of the ten-dollar bill, on stage at Illinois Wesleyan's E. Melba Kirkpatrick Laboratory Theatre. In Tim Slover's Treasure, directed by Michael Cotey, Hamilton is caught in a web of ambition, greed, carelessness, righteousness, honor and betrayal. What happens when a brilliant man with the country's best interests at heart finds himself the victim of his own baser instincts? Politics as usual, that's what. You'll find Treasure's themes of individualism vs. federalism and entrenched wealth vs. opportunity very, very current. Treasure has only two more performances, tonight and tomorrow at 8 pm.

Meanwhile, the Teenage Mutant Ninja Turtles of yesteryear appear at the Art Theater Co-op in Champaign. What's not to love about turtles who act like human teenagers, trained by a sewer rat to fight crime? They were all the rage in comic books and cartoons of the 80s, and they got a bunch of different movies, including the one from 1990 being screened at the Art. Not only is the Art offering this mutant classic movie on November 1, 2, 3 and 7, but they're also selling pizza at the Friday and Saturday shows. Cowabunga!

Dancing at Lughnasa, Brian Friel's evocative memory play about an Irish family in the 1930s, opens tonight at Illinois State University's Center for the Performing Arts. ISU professor Lori Adams directs this sweet, sad play about the Mundy sisters, played by and Natalie Blackman, Faith Servant, Fiona Stephens, Jaimie Taylor and Elsa Torner, with Arif Yampolsky as their brother Jack, and Robert Johnson as our narrator, who steps back into his childhood to tell this story.

University of Illinois professor Henson Keys appears the aging magician Prospero in Shakespeare's The Tempest, which continues through November 3 at the Krannert Center for the Performing Arts in Urbana. Robert G. Anderson directs this very different take on the The Tempest, which focuses on Prospero's exploitation of the island on which he has found himself marooned, bringing in "the ecological implications of theatre making while working to implement sustainable practices." This production has been presented in association with the Department of Landscape Architecture and the School of Architecture at the University of Illinois.

David Sedaris brings his brand of dry wit and wry humor to the Bloomington Center for the Performing Arts on November 6, including readings from "Let’s Explore Diabetes with Owls," his newest collection of essays, and a book signing. The next night, the BCPA hosts Dr. John, that master of voodoo-meets-R&B-meets-funktastic-piano who wrote "Right Place Wrong Time," won six Grammies, and made the Rock 'n' Roll Hall of Fame. That's a very interesting one-two punch for November 6 and 7. 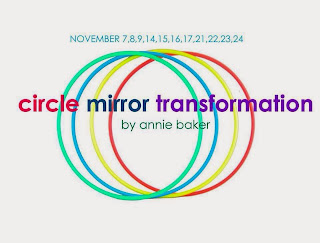 Annie Baker's Circle Mirror Transformation, a luminous and lovely play about four very different people who take an Adult Drama class at a small community center in Vermont, opens with a special pay-what-you-can preview on Thursday, November 7. Illinois State University professor Cyndee Brown directs Circle Mirror for Heartland with a cast that includes Cathy Sutliff as Marty, the teacher of the class, and Julia Besch, Dean Brown, Cristen Monson and Aaron Thomas as her students. You will see hula hooping, counting, the personification of trees, confessions and, yes, transformation on stage before you, with performances November 7-9, 14-17 and 21-24. Check out showtimes here or reservation information here.

Community Players opens Monty Python's Spamalot, the stage musical lovingly ripped off from the movie Monty Python and the Holy Grail, on their stage with a preview on November 7 and regular performances November 8-10, 14-17 and 21-24. Chris Terven leads the cast as King Arthur, with John Bowen as Sir Lancelot, Spencer Powell as Sir Galahad, Charles Boudreaux as Sir Bedevere and Sharon Russell as The Lady of the Lake. Marcia Weiss directs this epic farce, which manages to pack in all the familiar Python bits like the French taunter and the Knight of Ni (both played by Dave Krostal) as well as a lot of spoofing at the expense of the Great White Way. Click here for all the details about Community Players' production.

And the theatrical offerings on that very popular weekend are not over yet! MFA director David Ian Lee brings part II, the Perestroika half of Tony Kushner's masterpiece Angels in America, to Centennial West 207 that very same weekend. This "gay fantasia on national themes" looks at America in the 80s, when the AIDS crisis was just beginning, Ronald Reagan was in the White House, evil lawyer Roy Cohn was straddling the former and the latter, and a new century was about to crack wide open. Both Millennium Approaches and Perestroika were produced in ISU's Westhoff Theatre (the old Westhoff Theatre), with Patrick O'Gara directing the shows as part of the 1998-99 and 1999-2000 seasons. I have to think Lee will have a different take than O'Gara did, and it will be intriguing to see Perestroika by itself. I've seen Millennium as a stand-alone before (at the University of Illinois) and I had to wait a year between Millennium and Perestroika on Broadway, but otherwise... I've always seen them performed together. This will not be my first black box Angels, however. The Station Theater in Urbana did a bang-up job with both pieces, under the direction of Steven M. Keen, way back in 1996.

If you thought that was all the theater that could possibly open on November 7, you would be wrong. Clybourne Park, Bruce Norris's take on Lorraine Hansberry's classic A Raisin in the Sun, opens in the Studio Theatre at Krannert Center for the Performing Arts at the University of Illinois that very same weekend. Clybourne Park has emerged as one of the hottest plays of the past few years, earning Norris a Pulitzer and a Broadway run whose cast included U of I theatre alums Crystal Dickinson and Brandon Dirden. The U of I production is directed by Lisa Gaye Dixon and features Akua Sarhen in the role Dickinson played, and Preston “Wigasi” Brant in the role Dirden understudied.

Urbana's Station Theatre opens Come Back Little Sheba on November 7, as well, with performances until the 23rd, while across town Parkland College in Champaign goes with November 14 to start its production of Jon Jory's stage adaptation of Jane Austen's Pride and Prejudice. Phew! A show not starting on the 7th!

November is a little late for Hay Fever, but Noel Coward's droll comedy about a theatre family in the 1920s taking its act to the country is a welcome sight well past the allergy season. Illinois Wesleyan professor Nancy Loitz will direct Hay Fever for McPherson Theatre from the 19th through the 24th, with 8 pm performances on Tuesday, Wednesday, Thursday and Friday, and a Saturday matinee at 2 on November 24.

I would be remiss if I did not mention the Fred Astaire appearance at the Normal Theater, with Holiday Inn, a lesser effort that stars Bing Crosby as a man who opens a hotel/nightclub in Vermont that's only open on holidays. It's a precursor of sorts to White Christmas, what with the Irving Berlin score that includes the song "White Christmas," although this one is black and white and has some creepy blackface stuff for Abraham Lincoln's birthday. Fred plays Bing's ex-partner, a dancer named Ted Hanover who keeps getting into romantic triangles with singer Bing. Holiday Inn plays the big screen at the Normal Theater from November 21 to 24, followed by another holiday classic, Miracle on 34th Street, from November 28 to 30.
Posted by JulieK at 2:23 PM