Turner Classic Movies has announced that my favorite, Fred Astaire, is their star of the month for December, meaning there will be Astaire movies every Wednesday in December. I will be telling you more about that as the first Fred Film arrives, but before we even get to December, TCM is offering one last Screwball Comedy Friday in November. And it's a goodie, with three classics from director/screenwriter Preston Sturges taking the spotlight tonight.

These three are at the top of my Best Ever Lists, whether you're talking screwball, "dialogue comedies," romantic comedies, films of the 40s, or any other classification that includes funny, irreverent, witty movies like The Lady Eve, Christmas in July and The Palm Beach Story. 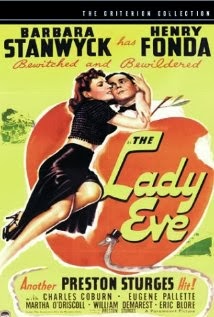 The Lady Eve is up first, starting at 7 pm Central time, and it's a gem, with a fun, feisty Barbara Stanwyck matched up with a very different Henry Fonda than you're probably used to. Stanwyck is a charming con woman named Jean who travels across the Atlantic with her wily dad, played by the irascible Charles Coburn, with Jean romancing rich men and the two combining to fleece their marks at card games. Fonda is Charles Poncefort Pike, AKA Hopsie, the shy heir to an ale fortune who is more interested in snakes than the eligible misses who keep throwing themselves in his path. But Jean's tricks are more sophisticated than most, and she snares poor Hopsie easily. It's Girl Cons Boy, Girl Gets Boy, Girls Loses Boy When He Finds Out About the Con Thing, and then Girl Plots Revenge. Her revenge scheme involves concocting a second identity, Lady Eve, who just happens to look exactly like Jean. Poor Hopsie falls hook, line and sinker all over again. It's adorable. And that premise creates a whirlwind of crazy antics as Jean, her dad, his old friend (played by the wonderful Eric Blore), Hopsie, his dad (Eugene Pallette, a staple of screwball comedies), and Hopsie's handler Muggsy (William Demarest eons before My Three Sons) all plot and counterplot. 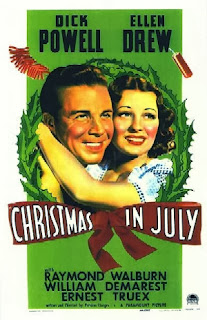 Christmas in July, whose title I borrowed for my second book, is up at 8:45 pm Central. It was Sturges' second directorial effort, after The Great McGinty, and the eighth film for which he wrote the screenplay. It does seem less sophisticated than The Lady Eve or The Palm Beach Story, but it's still fun and sprightly, with a hapless nice guy hero, played here by Dick Powell, who dreams of winning a contest and $25,000 by writing a slogan for a coffee company. His idea? "If you can't sleep at night, it's not the coffee, it's the bunk." A prank by his coworkers makes Powell's Jimmy think he won, and, after a series of misunderstandings involving actually getting a check from the coffee company, he makes himself the most popular guy in the neighborhood by buying presents for everyone on his street, as well as an engagement ring for his girlfriend. Christmas in July has that same sweetly satirical edge that makes Preston Sturges's work rise above, and the supporting cast, with Demarest again as well as Georgia Caine, Jimmy Conlin, Franklin Pangborn, Ernest Truex and Robert Warwick, is first-rate. 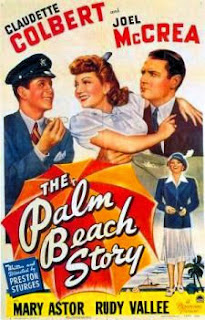 TCM's little Sturges Fest will finish up with the goofiest of the three, The Palm Beach Story, at 10 pm. In Palm Beach, Sturges plays with two sets of twins (both played by Claudette Colbert and Joel McCrea), a millionaire known as "The Wienie King," a train car full of the drunken members of the Ale and Quail Club, Rudy Vallee and Mary Astor as a rich but ridiculous brother and sister, and William Demarest, Jimmy Conlin, Franklin Pangborn, Ernest Truex and Robert Warwick from the Sturges stock company. There really isn't any good way to describe this fast, fizzy, flaky comedy, except to say that it's very funny and completely crazy. And you absolutely must stick around till the very end to see the beginning pay off.

I love romantic comedies, and these three are some of the best ever on film. For my money, rom coms haven't been the same since the 40s, when directors Preston Sturges, Ernst Lubitsch, Howard Hawks, Leo McCarey, Frank Capra, George Cukor and Mitchell Leisen were at the top of their game. To revisit the Golden Age of romantic comedy, all you need to do is tune in Turner Classic Movies beginning at 7 tonight.
Posted by JulieK at 1:54 PM