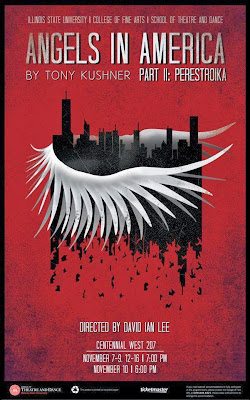 When the first half of Tony Kushner's Angels in America opus, the Millennium Approaches half, was unveiled to audiences in 1992 (in Los Angeles) and 1993 (on Broadway), audiences were stunned. The sweeping nature of the play, covering the past, the present, the future, the nature of change and staying the same, as well as all kinds of issues related to AIDS, homosexuality, Mormons, Jews, Marxism, Ronald Reagan Republicans, Roy Cohn and Joe McCarthy, Ethel Rosenberg, and of course, angels, kept people on the edge of their seats for the entire three hours it took to tell the first half of Kushner's story.

At the end of Millennium Approaches, by the time the character of Prior Walter utters the memorable line, "Very Stephen Spielberg" when an angel crashes through his ceiling, audiences were also desperate to find out what happened to WASPy Prior, who had been diagnosed with AIDS; Louis, the conflicted Jewish boyfriend who had deserted Prior when he became ill; Belize, a friend of Prior's who had been a drag queen but was now a nurse; a closeted Mormon Republican named Joe Pitt who was having trouble suppressing the fact that he was gay; Joe's unhappy wife, pill-popping Harper; Joe's hard-edged mother, Hannah, who came from Salt Lake City to find him; and Roy Cohn, the epitome of evil, a character based on the real-life lawyer and Washington power broker who'd sent the Rosenbergs to the chair and sat at the right hand of Senator Joe McCarthy.

Kushner's vision was huge, funny, fantastic, sad and true, all at once, what with that Angel crashing through the ceiling, a "threshold of revelation" where two strangers' reality overlapped in their dreams; a flaming Hebrew letter that appeared out of nowhere in a hospital room, and an imaginary travel agent named Mr. Lies who took one of the characters to Antarctica.

Angels in America Part II: Perestroika appeared on Broadway about six months after Millennium Approaches, and Kushner was still writing it, trimming it, polishing it till the last minute. This one was even bigger, coming in at four hours. Yes, that's right -- if you wanted the whole Angels story, back-to-back, it was going to take you seven hours. And the scope got even bigger, with Heaven and Hell and a whole phalanx of Angels now in the mix.

It's Perestroika that David Ian Lee is directing for Illinois State University in the intimate space at Centennial West 207, with performances scheduled for November 7, 8, 12, 13, 14, 15, and 16. Will it run four hours? Will we see Roy Cohn in Hell? Will Prior visit Heaven and see Louis's grandmother? Those are some of the variables involved in Tony Kushner's different revisions, along with whether Joe Pitt will go FFN when he strips off his Mormon temple garments, whether there will be projections to tell us the titles of the individual sections of the play, what kind of music or underscoring will be used, and how this production envisions the Perestroika landscape. Will it be a police-taped post-Apocalyptic mess? Look like the basement of the Smithsonian? Or like a giant shipwreck? I've seen all three, as well as one with a big ol' Bethesda Fountain front and center throughout the play and one that sent us to a giant disco inferno.

I have to think Lee's Perestroika will be simply staged, just given the venue. There's no room for rafters full of abandoned furniture or a giant ship's mast and sails crashed on the stage. But that is the beauty of Angels in America. It can be reshaped and reimagined and still come off just as stunning. It's an amazing piece of work.

For ISU, Nick Spindler will play Prior Walter, with Ross Kugman as Louis Ironson, Bryson Thomas as Belize, David Fisch as Joe Pitt, Cydney Moody as Harper Pitt, Kelsey Bunner as Hannah Pitt, Joe Faifer as Roy Cohn, and Emma Dreher as the Angel. Most of them will play other roles, as well, to fill in a character roster that includes the World's Oldest Living Bolshevik, mannequins in a tableau at the Mormon Visitors Center, and the ghost of Ethel Rosenberg. This is complex, difficult work for college-age actors, but also the kind of material they won't get a chance to work with very often.

If you're an actor and you get a chance to take a waltz with Angels in America, no matter when or where, I'm thinking you take it.
Posted by JulieK at 12:54 PM