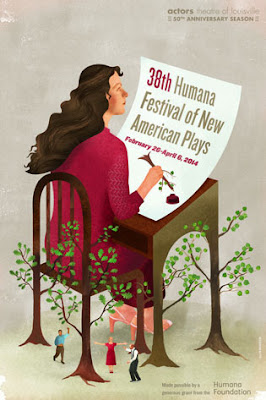 Actors Theatre of Louisville's Humana Festival of New American Plays, the one that's been setting the standard for new play festivals since 1976, has announced the six full-length shows that will be on the schedule in Spring 2014. The four weekends that make up Humana Festival 2014 begin March 14 and end April 6, with a different array of choices every weekend, tailored to suit college students and faculty (College Days), theater critics, directors, producers and agents (Industry Professionals), hometown fans in Louisville (Locals Pass) and theater fans in general (New Play Getaways). One of the most amazing things about the Humana Festival is how good Actors Theatre personnel are at juggling all those different visitors as they pass from one show to the next. There are four theater spaces inside Actors Theatre, plus they've explored cars, t-shirts, phones, museums, and a local elementary school as performance spaces over the years.

This year, the playwrights represented in the festival lineup will tackle religion, a distinctively American brand of folklore, finding adulthood, the possibility of hope in the wake of tragedy, and a sort of retrospective of Humana Festivals past. 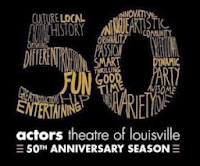 That last choice is called Remix 38, and it will serve two functions. First, the five commissioned playwrights -- Jackie Sibbles Drury, Basil Kreimendahl, Idris Goodwin, Justin Kuritzkes and Amelia Roper -- will celebrate the 50th anniversary of Actors Theatre through their work, picking up on the history of the Humana Festival in short pieces designed to "pay playful homage to iconic plays from past Humana Festivals." Anybody want to guess which plays will show up in this "playful homage"?

You have to think the three Humana plays that won the Pulitzer Prize deserve mention. Those three are D.L. Coburn's The Gin Game, Beth Henley's Crimes of the Heart and Donald Margulies' Dinner with Friends. Other notable plays from Humana Fests Past I'd expect to see referenced include Keely and Du and Talking With... by Jane Martin, Agnes of God by John Pielmeier, A Piece of My Heart by Shirley Lauro, Big Love by Charles Mee, After Ashley and Becky Shaw by Gina Gionfriddo, Omnium-Gatherum by Alexandra Gersten-Vassilaros and Theresa Rebeck, Marisol by José Rivera, and TAPE by Stephen Belber. Since Jane Martin is a pseudonym widely believed to belong to former Humana Festival Artistic Director Jon Jory, and pretty much everything "Martin" wrote ended up at the Festival, I have a feeling there might be an overview of sorts of the "Jane Martin" oeuvre from 1981's Twirlers to Listeners in 2006.

Remix 38 will also function as the annual showcase for Actors Theatre's Apprentice/Intern program, with Actors Theatre's corps of apprentice actors taking on all the roles. That includes Illinois State University grad Devon Nimerfroh, who appeared in plays like Picnic and Mother Courage while at ISU and in several roles in last summer's 10-Minute Play Festival at Heartland Theatre.

Anne Bogart will be back at Humana Fest in 2014, this time with Steel Hammer, a piece performed and created by Bogart's SITI Company. Julia Wolfe, of the musical group Bang on a Can, did the music and lyrics for this exploration of the legend of John Henry, the railroad man with a hammer who raced against a steam-powered drill in a contest of steel-driving strength and speed. The script for this piece has been provided by playwrights Kia Corthron, Will Power, Carl Hancock Rux and Regina Taylor.

Also back: Lucas Hnath, whose short play nightnight was one of my favorites last year. Hnath set his sights on the intersection of death and money in Death Tax, a Humana entry in 2012 that got a lot of notice as well as a nomination for the Steinberg New Play Award. This time, he'll look at the intersetcion of religion and money in The Christians, about a pastor at a megachurch who changes his mind about what's important.

Jordan Harrison is another familiar name; his time-warped Maple and Vine was a hit at the Humana Festival in 2011, while full-length plays Act a Lady (2006) and Kid-Simple (2004) and a short play called Fit for Feet (2003) kept audiences talking in previous years. Harrison is back this time with something called The Grown-Up, which Actors Theatre calls "a time-bending, sad, funny adventure about how to survive growing up."

Dorothy Fortenberry's Partners also involves the whole growing up thing, as it examines what happens to a pair of BFFs when money and relationships and what it really means to be an adult get in the way. Fortenberry is a new name to me, but she is a writer for the television show The 100 on the CW network, winner of the 2011 Helen Merrill Award for Emerging Playwrights, and a two-time finalist for the O’Neill National Playwrights Conference.

The last full-length play on the schedule, Kimber Lee's brownsville song (b-side for tray), looks at how a family tries to cope when a boy who hasn't had a chance to grow up yet is taken from them. Tray is killed in the kind of stupid, senseless violence we see in the headlines every day. Lee's "scattered rhythms" take Tray's family before and after the tragedy to show how they struggle to find hope.

For all the details on Humana Festival 2014, keep an eye on Actors Theatre of Louisville. Ticket packages go on sale November 12 (yes, that's tomorrow) while single tickets will be offered starting the 14th.
Posted by JulieK at 1:07 PM