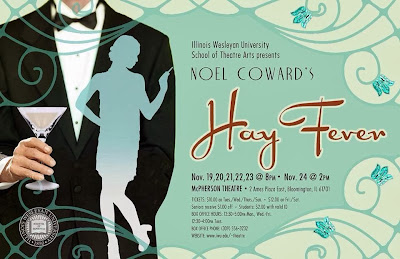 Achoo! I don't recall anyone sneezing in Noel Coward's Hay Fever, although it would be in character if it were the biggest, most over-the-top sneeze ever. Hay Fever, which first played in London in 1925, is one of those blithe and witty comedies about crazy theatrical people who pull a few unsuspecting "normal" people (i.e., not theatre people) into their orbit and the hijinks that ensue when they do. It's sort of The Royal Family by way of Private Lives.

This one involves Judith Bliss, grande dame of the English stage, and her husband, David, a novelist, who decide to spend a weekend at their country home, with their equally flaky children, Simon and Sorel, in tow. Each of them has asked along a potential romantic partner, but once their guests are there, the Blisses pull all sorts of parlor games and silly tricks that baffle the newcomers. There are misunderstandings when flowery dialogue from one of Judith's hit shows is inserted into real conversations, feigned mad passion, emotional outbursts and all sorts of tempests in teapots. The Blisses are charming, eccentric and self-indulgent, with a sort of 1920s "tennis, anyone?" elegance along with their madcap antics.

Hay Fever may not be revived as often as Private Lives or Blithe Spirit, but it has enjoyed four Broadway productions since it opened in 1925 with Laura Hope Crews (Aunt Pittypat in Gone with the Wind) as Judith Bliss and multiple British productions in London and the provinces. Over the years, actresses as different as Shirley Booth, Constance Collier, Judi Dench, Lindsay Duncan, Edith Evans, Rosemary Harris and Diana Rigg have all played Judith, while Derek Jacobi, Ian McKellen and Sam Waterston have done Simon, and Maggie Smith has played both Myra and Jackie, the female guests in the party.

Illinois Wesleyan professor Nancy Loitz directs the McPherson Theatre production of Hay Fever that opens tomorrow, with Kate Fitzgerald as Judith, Ian Scarlato as David, Abby Dryden and Will Henke as Sorel and Simon, Joey Chu, Jenna Haimes, Forrest Loeffler and Priscilla Moy as the confused guests who wander into the Bliss household, and Alexa Eldridge as the family housekeeper. Debra Madans completes the cast as an understudy.

IWU's production begins Tuesday November 19 and continues through Saturday November 23, with performances at 8 pm each night. There will also be a Sunday matinee at 2 pm on the 24th. For ticket information, you can click here for the box office site, visit the the School of Theatre Arts Facebook page, or call the box office directly at 309-556-3232.
Posted by JulieK at 3:00 PM